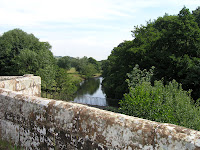 (Click on photos to enlarge)
The view, above, is taken from the 1724 Lanercost Bridge. 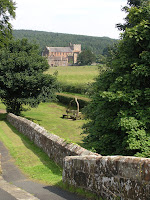 Facing eastwards towards the very picturesque village of Lanercost you again glimpse the Priory which has an amazing history. It is a 12th century Augustinian Priory built largely from stone taken from Hadrian's Wall. It became a prime target for the Border Reivers due to its proximity to the Scottish Border and the Wall. Two famous raiders or Reivers were Robert the Bruce and William Wallace. Edward I and his retinue stayed three times there, the last occasion for five months as he had fallen ill. The priory was one of the first to suffer in the dissolution of the monasteries. Henry VIII gave it to Sir Thomas, Lord Dacre (the illegitimate son of Lord Dacre of Naworth) and it became a family mansion. The male side of the family died out in 1716 and the weeds started to take it over. In 1740 what was left of the church was reclaimed and it is still in use as a church today. 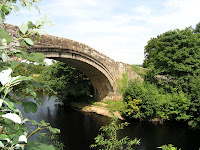 One side of Lanercost Bridge. 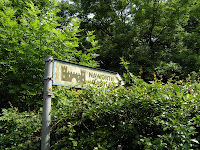 A sign, beside the bridge, pointing to the nearby Naworth Castle.
Scribbled by Hadriana's Treasures at 10:27