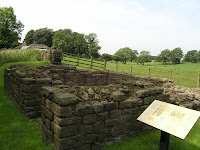 (Click on photos to enlarge)
This is Leahill Turret 51A- part of Hadrian's Wall. 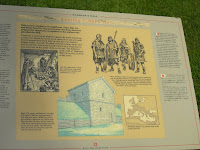 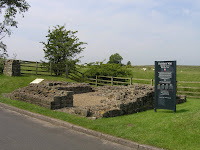 This is Piper Syke Turret 49A further along from Leahill Turret.

Again these are timeless places, literally just off the Military Road. If you are driving fast enough you will whizz past and miss it completely. This is what I normally do. For once I stopped, got out and took some photos. They are fantastic spots in the sun but as always I try and think what it must have been like for those poor Roman soldiers in the wind, rain and snow. Can't have been much fun building the Wall either. Soldiers, rather than slaves, built it. Their names and letters home are coming to light via the tablets unearthed at nearby Vindolanda. 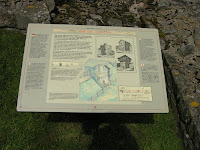 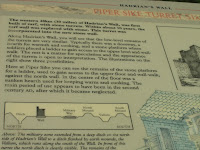 This photo shows the extent of the "military" attitude to guarding the Wall: Ditch (Scotland side), the Wall, the Military Way, North Mound, Vallum or Ditch, South Mound. The Romans certainly did not mess about! It is debated a lot why the Wall came to be here in the first place. Emperor Hadrian decided to build it to show the Northern limit of the Roman Empire (he built walls, in a variety of materials but not usually of stone, around the whole extent of the Roman Empire). There has been controversy as what the Wall actually "did". Personally I think it represented a lot of things: To show how Mighty the Romans were, to show the limit of the Empire (at least in Britain), to check the flow of goods North/South, to tax people as they went through it and to keep the warring tribes (further to the North) at bay.
Scribbled by Hadriana's Treasures at 10:55