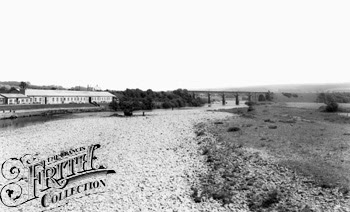 "By the time you read this, my swollen ankle, sunburn and bag of mud-spattered dirty laundry will be, I hope, just a memory, along with hundreds of other more pleasant ones from my journey along Hadrian's Wall. I don't intend to bang on about the trip again. If you listened to the shows, you'll have heard enough about that. But I'd like to say why we did it, in light of something a former radio executive said to me about it. Namely. "Why?"

Well, I'm interested in how people live, work and play in Bowness-on-Solway and Carlisle, in Crosby-on-Eden and Chollerford, in Byker and Wallsend. There are fewer of them, I grant you, but they appreciate their radio favourites as much as any big-city denizen. And they pay their licence fees, often for programmes that assume they care about Routemaster buses, Tube strikes and an inch of snow bringing chaos to Chalk Farm. To ask why, when radio programmes turn their faces north and reflect on their lives and loves, is not just bizarre, it's vaguely insulting.

A lady who met me with her madly energetic dog just outside Wallsend turned out to be a fan of my 6 Music show Freak Zone. She said that with the demise of the independent record shop, my show was becoming her main source of new music and new old music from around Britain. The village of Ryton on the Tyne, home to The Unthanks, one of Britain's best new folks acts. They told me they'd never heard their home patch mentioned on national radio before. I heard the same in Burgh-by Sands* and Brampton and Banks. True, these places are small, but no smaller than Highbury or Clapham, and yet I've grown up hearing those names in dramas, comedies or the news with the implication being that they are places I should know.

A man I met on the Whin Sill ridge by the sycamore tree immortalised by a visit from Kevin Costner in Robin Hood, Prince of Thieves thanked me profusely for coming to his village** of Haltwhistle, and when I said that it probably only usually got mentioned on local radio he said, "We don't even get mentioned on that."

Anyway, I shall step down from from my soapbox and simply say, in answer to the question "why?": because it's there."

Hadriana: I recently wrote to Stuart kindly asking if I could re-produce the article here but I've not had a response as yet. Not to worry..thought I...he's a busy chap. I still think the article deserves a bit of a wider audience as it has not been posted on the web as yet (not to my knowledge). I thoroughly agree with its content and it is very nice to hear a national broadcaster's non-London centric views!

Hadriana's tiny, incidental notes:
* pronounced.....Bruff-by Sands
** Haltwhistle is known as a town in these parts...
(Above Photo of "South Tyne at Haltwhistle", my choice, from the Frith Collection)
Scribbled by Hadriana's Treasures at 15:14

Really fantastic, HT - We are singing from the same song-sheet, my love - And we're in good company with Mr Maconie - I love his shows! Love to you xox

Good to read Stuart's thoughts. And Why not indeed?
I'm just sorry that I missed the programmes that week, but it's been great seeing the places I hold dear to my heart printed here.
How are you anyway? Hope you're doing well. Have a great weekend.
Cheers.

Haltwhistle is not merely a town but is it not the geographical centre of mainland Britain? It is London that is at the periphery, not us folks in the North and the true heart of things..

Fantastic to hear some non-London-centric views. There is life elsewhere, and some in the media recognise it. Phew!

My hubbie would agree with you wholeheartedly, coming as he does from the midlands and his wider family from Northumbria. He always tells our foreign visitors to visit other parts of Britain than just heading for London, because one sixth of people live in London but five sixths live elsewhere. In other words, London is not typical of our country as a whole.

I think you are true to yourself. I often wonder why visitors head to the cities which are the same every where. your photos and blog gives a different prespective, keep it up

I thought that Cumbria, particularly Appleby was the centre of the universe? I guess not eh!!!

Gill in Canada, now, which I am guessing should be the centre of the universe if Appleby in Cumbria can't be!!

Hi,
Thought I would pop over to see how you are doing as maybe you have some results?
I do hope that things are okay with you.
Take care, Lynne

Hadriana, I know where Haltwhistle is! I've been there! Here in LaLaLand of Southern California (no, I don't live in Los Angeles anymore, I live in a town 60 miles away that no one has ever heard of. But if I say, you know, half way between Malibu and Santa Barbara, everyone nods their heads and says, "Ah.") it's all about Los Angeles or Hollywood. Real people do live in Los Angeles, but more real people live in towns and cities without famous names. And we live very happily, thank you very much :)

Good to read you again. One day I will visit your part of the world and take it all in for myself :)

There's nothing like small town fare and old fashioned good manners going round...its the same here as there...tired of New York and Atlanta and Charlotte...lets hear about the outlying areas of these cities...where Crime is minor and generosity is openhanded! Love this...made me miss my Radio Times...
Sandi

Quite right too, Hadriana. London is lovely, but the streets, you will be surprised to hear, are not paved with gold x

Hope you are okay.

Pop over to mine and you might see a photo taken on a walk today that might interest you!

Hi everyone...I will be back to comment very soon.

I have missed blogging...but must go and do stuff. Why are there not enough hours in the day (and night) for that matter? I've missed chatting to you all. :)