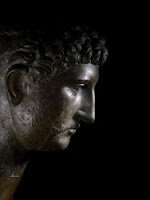 Bronze head of the Roman Emperor Hadrian (r.AD117-138), once part of a complete, larger-than-life-size. 2nd century AD. Found in the River Thames at London Bridge, in 1834 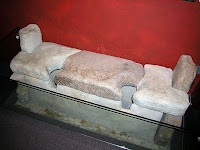 Last Saturday was the second last day of Hadrian's Head at the Wallsend/Segedunum exhibition. I'd been meaning to go and see "Hadrian's Head" for ages. I knew that I had to go and see it returned to London at the British Museum. It was a wonderfully sunny day so I decided to go for it with the two little ones in tow. Wallsend (Sting's home town) is relatively easy to find. From the West you turn right off "the Coast Road" (A1058) and then head for the Tyne. Likewise from the East you turn left...it is incredibly easy to get there. There's also a local "Metro" station...which is Tyneside's very own version of London's "Tube". Parking is free and right outside the Museum. The staff are very helpful and as it is a small museum it is simple to get around.

Following on from expatmum's recent lavatorial themed posts I think I should mention that Segedunum has the only example of a Roman loo found in Britain. There is also a reconstructed Roman Bath House which shows how the Romans were not too bothered about having any loo privacy i.e. they literally all mucked in together. I stupidly left my camera in the car and as it was so hot and the children were being pretty good I decided not to disturb the equilibrium. Jamie Shafer has put together some excellent photos of Segedunum which are all self explanatory. In Photo No. 6 of The Bath House there is also a picture of "Hadrian's Head" and whilst not immediately apparent...it bears an amazing similarity to that of Charles Clarke MP (see above). From my children's point of view the Roman exhibition was a bit too "high brow" for them. Not surprising as they are still very young. However for slightly older children (say 6 upwards) there are exhibits which will keep them amused: there are computer screens with archeology games; they can dress up as Romans and there is a small part about how the Romans approached medecine. There is a very small cafe there which offers sandwiches and cakes (I would advise you to bring your own supplies if your kiddie winks have special food desires/wants/needs). There were other exhibitions there which we didn't get to see such as the Egyptology one which would be a great hit with children. One point to think about is that this may be a museum to do first before seeing other bits of the Wall as there is not much left of the fort compared with say the Roman remains at Vindolanda, Chesters, Birdoswald and so forth. Nevertheless as children always like discussion of toiletry habits then a visit to Segedunum is worth it purely for the Bath House and the Latrines alone! (I've also vowed never to leave my camera behind again.)
Scribbled by Hadriana's Treasures at 14:22