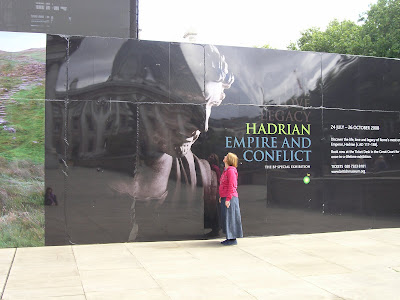 Hadrian meets Hadriana: "It's up close and personal now pet!" 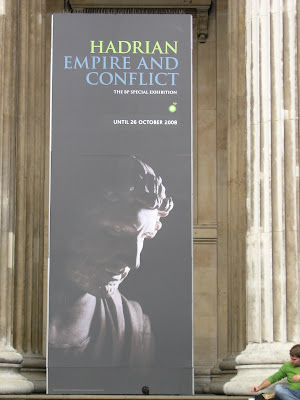 Hadrian surveys his new subjects outside The British Museum. 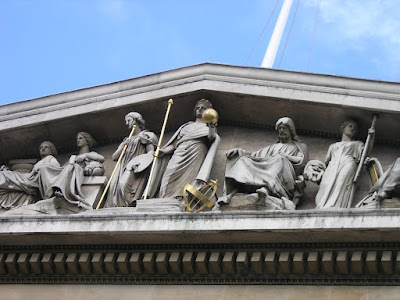 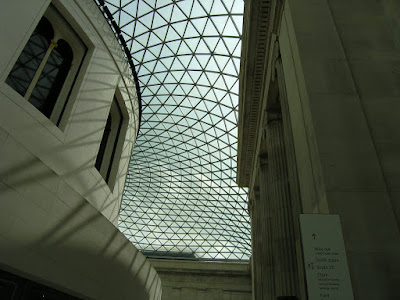 I think it is definitely worth going to the Hadrian Empire and Conflict Exhibition if you have the time, the inclination and the odd denarius (coin) or two 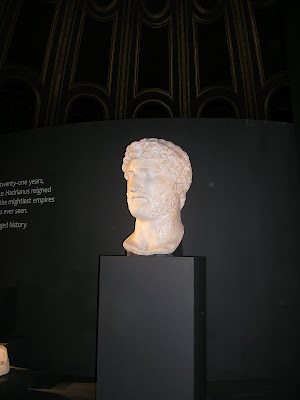 !
The exhibition covers Hadrian's whole life, love(s), reign, and grand living quarters (his sumptuous villa/entire town at Tivoli). To his final resting place (Mauseoleum)/Castel San Angelo in Rome.
On the way home in the car. I read this letter from The Daily Telegraph (06/09/08):
Poor gallery layouts undermine visitors’ enjoyment SIR – Like Catherine Adams (Letters, September 3), I also went to Getty Images Gallery after seeing it on your website and was amazed by the clarity and atmosphere of these photographs, as well as the accessibility of the exhibits. I then went to the much-vaunted Hadrian exhibition at the British Museum and was very disappointed – not by the content, but by the display layout. Small exhibits were in cases at waist level. Labels were displayed at knee level with subdued overhead lighting, with the result that, as soon as a visitor leant over to look into the case, no one else could see a thing. He could not read it either, as his shadow was cast over the label. Fortunately, on returning home, I caught Dan Snow’s BBC programme Hadrian, which gave close-ups of the exhibits I had struggled to see, and I watched from the comfort of my armchair. Chris Green, Prestwood, Buckinghamshire
I have to say that the exhibition was jam packed and agree with a lot of the sentiments expressed here. That is a pity because there were a great many interesting exhibits - including some of the famous Vindolanda wooden tablets. I also did see Dan Snow's marvellous programme and I am hoping that I recorded it somewhere. If you can't get to the exhibition...try to see Dan's BBC programme on Hadrian. Well worth a visit!
Scribbled by Hadriana's Treasures at 18:12

My family and I went to the Roman Army Museum in Cumbria near Hadrian's Wall in 2003. Fascinating stuff.

You didn't catch the Emperor at Tullie did you? The bust from the thames was here? we had it here in the spring..
hope the cold is better now!!
and did you meet up with your fellow blogger!?

a day in London...sigh!! My last day there was in June I went around the National and The Portrait galleries..was great all by my own!

off to newcastle on saturday, for shops not culture....the top of the baltic freaks the husband out!!

Fantastic photos. I love the first one!

I just loved these photos. Glad you had a good time. Seems well worth the visit.

Crikey Dumdad...the Roman Army Museum is literally a stone's throw from where we live! Like us it probably has a Cumbrian address but is really in Northumberland. Maybe the Vindolanda tablets had a Roman postcode. There's a thought!

FFF - Unfortunately I did not see the bust when it was at Tullie House but saw it over in Segedunum (Wallsend). But thanks to you I will explore Tullie House more now (as it is on my doorstep). The cold is better thanks. I've not met up with any other bloggers (which is getting to be my speciality) but hope to do so next month (that WILL be on my own...cannot wait!) Enjoy Newcastle and the shops. Will be in touch soon. Hx

Hi Suburbia and Maggie May...glad you liked the photos. If you look really closely in the first one you can see my daughter in the background (bless her)! Yes, Maggie..I'm glad I went to see all about my sort-of-hero, Hadrian. It would be great if they put on a permanent exhibition of it all up here. Then again we do have the Wall so cannot complain too much! :-)

I remember the Vindolanda tablets well - we used to run annual history (day) trips to the Wall (and Vindolanda museum) when I taught in Cheshire. That's a long way up the M6! And it's a long way down the A1 to the BM, so I might have to make do with the Dan Snow prog (which I think you can still download from BBCi). Apropos of almost nothing, did you know that it was Hadrian who began the trend for Roman beards?

Hello The Dotterel - I had an inkling that he did. He's got a lot to answer for!

And apropos of nothing as well...apologies to all bloggers and their sites...which I have not visited of late. I am still wrestling with some accounts for the B&B which we ran last year! The 31 October deadline is looming and I'd much rather be blogging...

I hope you can still download the programme, The Dotterel, I get a little disappointed with the BBC iplayer...it promises so much and yet!

I saw Dan Snow's TV programme back in the summer and learned a lot more about Hadrian than I already knew. I must try to get to see the exhibition. It is always the same... when you live in a town, you are less likely to visit things than the tourists who travel miles to see them.

I know what you mean, Rosiero, despite this blog I feel I do not this area enough justice!