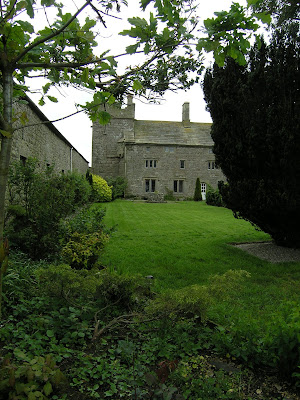 Again I am writing this very quickly as I seem to be in a permanent rush.
One blogger, Rick Cooper, left a very pertinent comment about the Lake District (on my last post) and the floods. Yes!..a couple of areas have suffered from the floods but the main message is that The Lake District and all areas of Cumbria and Northumberland (for that matter) are very much open for business! Please continue to come and see the delights of these two counties.... :)
OK...I'll stop bossing you about now....
These photos show another Cumbrian surprise...Askerton Castle Estate. A Reiver Castle nestling just above Brampton...it is from here that we source our organic meat. It is a glorious farm run by a wonderfully friendly family. (They have taught themselves to farm in just five or six years.) They throw open their doors for a day long Summer Barbeque. They also have animals galore...alpacas, hens, sheep, ducks and loads more. 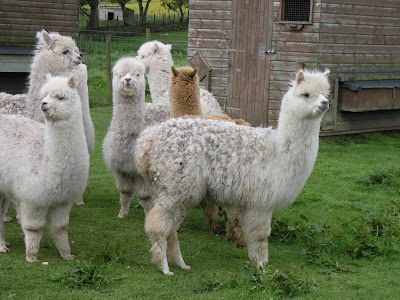 I found a little piece of history about Askerton Castle completely by accident. (My rummagings on the internet know no bounds.) I will include the link here. (From: English Castles: A Guide by Adrian Pettifer)
I'm currently preparing the accounts for the B&B. Things are looking up but I don't want to spoil things until they are in the bag. I just don't want to jinx it. So I will tell you more when it is ready to be hatched. 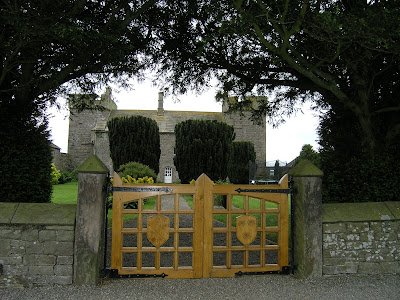 There is so much that I want to do with this blog. When things calm down...(will they ever?)...I can write those posts which I have promised you over this year.
We went to a breathtakingly enjoyable Christingle service yesterday up at Knarsdale (on the way to Slaggyford and Alston). Knarsdale is still in Northumberland but like many places along the border with Cumbria (just like our B&B) they have a Cumbrian address and post code.
There was a Christmas fair (involving lots of scrumptious homemade cakes, biscuits and Christmas pressies to be) in the very pretty and attractive church of St. Jude's. The Christingle service followed - at which the children of Herdley Bank School, sang songs, conjuring up tears unbidden, such as this Celtic blessing:
"May the road rise to meet you,
May the wind be always at your back,
May the sun shine warm upon your face,
And the rain fall soft upon your fields.
Until we meet again,
May God hold you in the hollow of His hand."
We even managed to get a coffee, or something stronger, at the well recommended Kirkstyle Inn - next door to the church (kirk) obviously. (Link to Walk 13: Knarsdale and Kirkhaugh...one of the famed 22 Haltwhistle "Ring" Walks. Also found a potted history of Knarsdale here...mighty interesting it is too! Cycling around the Pennines leaflet is included here.)

There are lots of Reiver Castles, bastle (houses certainly fortified with stones/iron bars, perhaps with alcohol) houses and castles scattered around the Border Country. 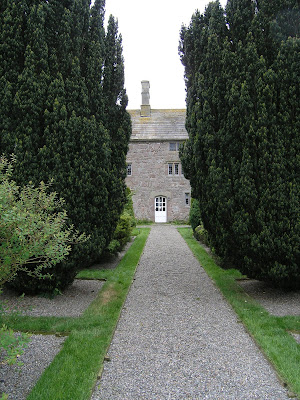 (The Border Country..which covers the border of Scotland and England...going a fair bit inland either side of the border of the two countries...encompassing Cumbria and Northumberland.)
The Reiver period is something I want to know more about. It could be said that it lasted from the break up of the Roman Empire c. AD400 until early/mid 17th century(AD). It was at its zenith from the late 13th century to the late 16th century.
Basically it became The Wild West to East Border up here. There was a great deal of fighting (that is putting it mildly) between the English clans and the Scottish clans and families. The families also bickered amongst themselves.
Border Reiver family names along here abound: Nixons, Armstrongs, Grahams, Ridleys, Liddells, Reids, Elliotts, Taits, Bells and so on...their descendants are still among us. These Reiver surnames (and more) are very common in these parts.
Their ancestors were notorious for stealing cattle, horses, harvests and even women! And that was when they were in a good mood...
We get bereaved and blackmail from the Reivers. (There is much more vocabulary which I will expand upon another time.)
Although it will not have been a dreamy period through which to live, nay, survive...what they have left behind conjures up lands of mists, adventure, lawlessness, thieving, brigands, daredevilry, lawlessness, murder, ghosts, passions, guile, spite, lawlessness, torn love, kidnap, jealousy, clannishness and many other words which allow the imagination to roam boundlessly and lawlessnessly. (In these days of political correctness...I do tend to think of them as heroes...although I know deep down...that is not the case....)
So all I can say....Please do come and visit Cumbria and Northumbria......and let the landscape do the talking, whispering and the unfettered imagining for you! 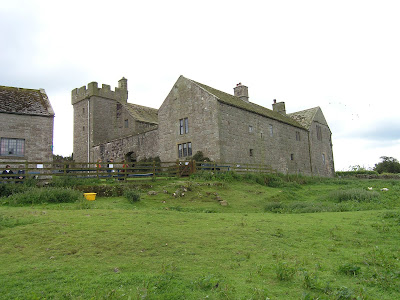 Scribbled by Hadriana's Treasures at 11:11

I will. I will travel back over the ocean to the home of my heart...thanking you for the invitation...
Sandi

Husband and I played golf at Alston (meant to be the highest golf course in England).

*sigh* right now i wish i could just jump on the bus and gan hyem for a visit. you make my heart homesick.
great post.
:-)

Where I lived near Alnwick there were many Peel Towers. I liked them more than the grander castles in many ways.

There used to be a very good book listing all the castles and towers of Northumberland _ I have lost my copy - I bet there are some available though.

I used to love the stories of the border reivers, but, as you say, perhaps not the most PC of gentlemen...

I hear you!!...YES we are all open for business even Cockermouth itself!!!!

Would love to visit :)

Fingers crossed on the B&B for you.

If I can ever persuade Mr FF to leave his beloved part of the world then I would love to come and book rooms in the B&B and get to know you and your lovely area. You never know...

An award for you over at mine...

I'm with Clippy. We'll get the next bus over!

Thank you all! Please do come if you have the time...

Lindsay...yes...Alston is pretty high. It certainly is the highest market town in England.

Fly...Thank you for the award. I am absolutely rubbish at passing them on. I'll be over soon.

We are dealing with the banks again so you'll have to excuse my tardiness. Lots of Dickensian paperwork when I'd rather be blogging. ;)

FF: Please do come and stay. You'd be very welcome and it would be wonderful to properly meet you and Mr. FF.....

Oh, I would love to come up, but time is the problem at the moment. I'll make it up there again one day!

Goodness, don't worry about doing anything with it.....my pleasure to pass it on.
Good luck with the dickensien activities.

Oh Fly...just popped over for a chat. You can tell I went to a Catholic school as I have a guilt complex about everything.

Problem is - that I just want to do so much of everything...all of the time.

That said...still nice to pop over for a chat. When blogs start offering tea and cappuccinos....as well as words.........

Utterly utterly gorgeous. We are on our way!!x

The Reivers were known to kidnap women? Was this in a Tiger Woodish way or in a Kim and Aggie way?

Sending happy positive thoughts to you and the B and B

Ah, the Border Reivers - I love our history here, HT! A beautiful paeon of a post, and your photography is wonderful!

Good luck with Scrooge's paperwork and the Demon Bankers! xox

Gosh...it's Sunday lunch time and I'm drinking a gin and tonic on a lovely sunny day. All is right with the word/world. Cheers everybody! Hxx

That should be 2009. You can tell I am ever so slightly happy!

Stunning pictures. And Northumberland is definitely open for business, I can't imagine anyone thinking it's not. But at the same time, there are parts of it we locals would like to keep for ourselves!!

Really chuffed your figures were good...look forward to a good year in 2010.

It is a long way to go for me but you have made it so interesting, it is on my list of places to visit. I have never really seen the alpaca before - hard abt the wool. Kind of funny looking mix between sheep and giraff?

Thinking of you and will be back next year.

Merry Christmas everyone and thank you so much for popping by and leaving a comment! Hadriana xx