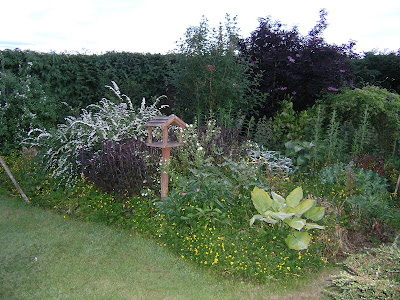 1. Here is a photo of our garden taken last Summer. 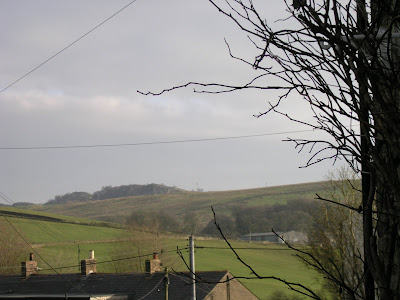 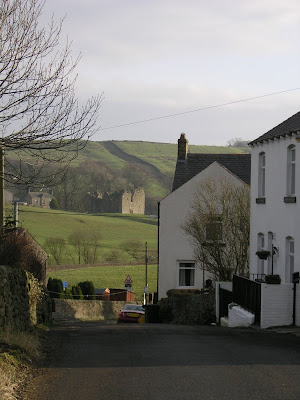 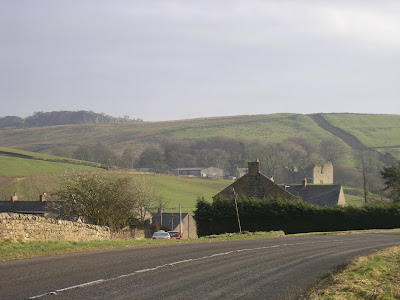 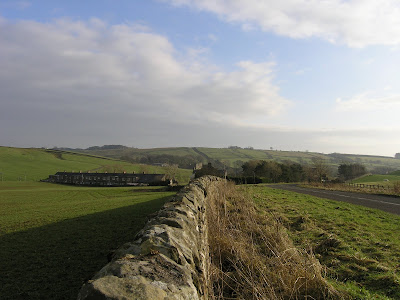 2. A view from the side of our house looking towards Walltown and the crags/Hadrian's Wall.

3. A view taken from Longbyre "high street". Essentially the hamlet has one street running down its centre looking towards Thirlwall Castle and the Vallum (Roman - Hadrianic ditch). (It still reminds me of a Spanish village some how!)

4. A photo taken from the road running behind our house (B6318). The house peeks out from an unruly hedge. Behind us you can see the crags on the Whin Sill, the Castle and the Vallum.

5. A view beside a drystone wall beside Farmer Scott's land looking at the house etcetera.

I took these photos a few days ago as they give a good idea of where we are in relation to Hadrian's Wall. We are well and truly in the central section of Hadrian's Wall. (For us - the best bit!) The Wall, itself, no longer remains in the section sweeping down to us. It exists in a ghostlike fashion. There is a tiny bit left on the old railway embankment near us which I showed to you in the snowy photos. The Wall re-emerges nearer Gilsland, the next village along from us. Gilsland straddles the Northumberland/Cumbria border...which also has the Poltross Burn Milecastle no.48 (a "must see" as it still has some steps which have allowed archaeologists to calculate how high Hadrian's Wall would have been: about 6.5 metres - 21 feet - with the parapet included.)

So how did we end up in this neck of the woods? I recounted our story here and here as to how and why we came back to Northumberland. (I admit that I wrote this a wee while ago and you may care to refresh your memory by reading them again.)

So in times of ever expanding prices...we now had to find a home and a business for our hard earned pennies at the height of the property boom (2003-2007).

We started looking around from 2004 onwards. We looked abroad for a dive centre but we kept on being drawn back to this region again and again.

We had fallen in love with the people, the community, the jaw-dropppingly-magnificent scenery and the history. I kept seeing the Roman stones and I kept thinking what do they mean? How did they get here? Why are they still here? What on earth were the Romans thinking when they built all these things? Were they mad?

The questions continued to bubble up but other issues took priority. For instance, despite the drip, drip of the Roman quandries, daily life went on: children to feed, tidy up, dress, entertain and the mere fact of a business to be obtained...we needed some money to earn and to live off!

Initially we wanted to find a self catering type property or properties but unlike Devon or Cornwall where farming tended to happen on a small, family scale...here farming was managed and achieved through vast farming estates (owned, on the whole, by titled families). Farms were run using labourers who lived in cottages. Those cottages are often to be found, boxed in, on a huge swathe of land, with a tiny pocket of a garden attached, clinging to the sides of main roads. Perhaps they were not interested in gardening when they spent their entire lives working the land. Perhaps they had no spare time available to lavish on a garden?

The history of the Reivers had also had its effect too...the bigger houses tended to be built in safer areas. The "old" money gravitated to those regions too. This whole area is dominated by the Whin Sill (a huge outcrop of dominating rock...from where you tend to get the most super photos of the Wall). It's no secret that the stretches of Hadrian's Wall, which have survived, were in pure Reiver territory. People were too scared to try and live in these lands. Towns, industry and normal lives were pursued in Newcastle, Carlisle and beyond.

Haltwhistle has an industrial history...largely of mining, quarrying plus service industries and the like. A couple of hundred years ago rows of terraced housing began to spring up there alongside country cottages. One of the grandest houses in Haltwhistle overlooks the town and it belonged to the mine manager in days gone by...

Gilsland used to be a Victorian spa town. Hence you will find a lot of the larger Victorian town houses there. Quite an oddity compared to other towns and villages surrounding it. Fascinating nevertheless.

So you may have gathered by now...that suitable propeties..available for self catering were rarer than hens' teeth.

We had heard on the grapevine that the Bed and Breakfast trade was really picking up since the Hadrian's Wall trail had opened in 2003. After looking at many, many properties from Carrshield, Mohope, Slaggyford, Nenthead, Gilsland, Haydon Bridge, Hexham, Carlisle and up towards Bamburgh Castle, the Borders and elsewhere...we then switched our attention and energies to seeking out a suitable B&B property to purchase....a bit closer to "home"...

To be contined....
Scribbled by Hadriana's Treasures at 10:13

So interesting to have the background. Thanks.

I went walking with jane today and we both said how much we miss Northumberland. So many great places to walk and visit. Of all the places I have lived I think Northumberland had more and more varied landscape to offer than any other

It is interesting to hear how other folk make decisions about their lives. It is certainly a beautiful part of our lovely country. I look forward to hearing more. Ax

that was interesting, loved the photos also.

Yes...we fell in love with all of this and more. I can't explain why or even how in any great detail. It is funny how life turns out.

I always thought I would end up living in a hot, Mediterranean country and here we are in Northumberland: by turns...wet, damp, soggy and sometimes blisteringly hot! It is full of surprises...Hxx