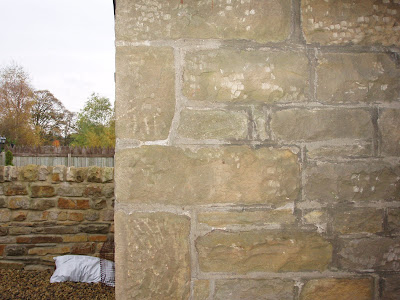 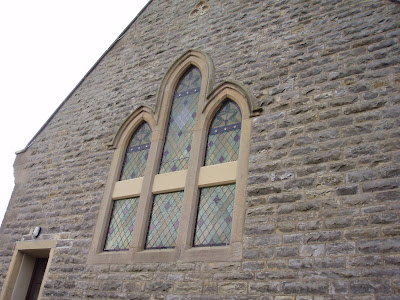 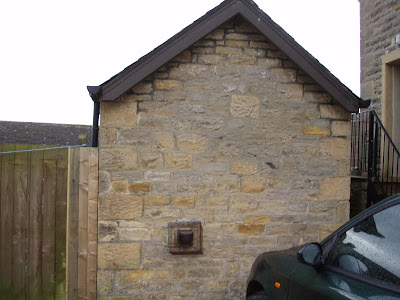 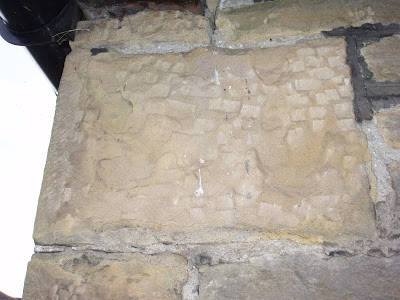 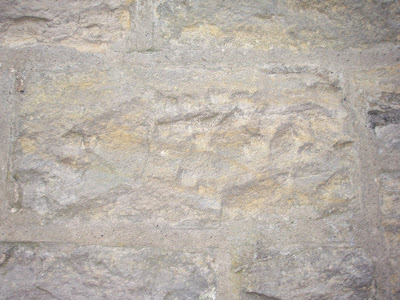 Some of these stones (featured) are actual Roman stones pinched from Vindolanda in the 1800s to help build this outhouse. I've also taken a photo of the side of the chapel with the stained glass windows to show you how the main chapel looks (at least from one side).

I mentioned these stones beforehand in another post. Robin Birley, from The Vindolanda Trust, has confirmed that they are indeed from the granaries (very highly likely) back at the main fort at Vindolanda. In a recent talk which he gave last year...he stated that there was a big trench found alongside the granaries which could have only been made in more modern times. He had a hunch that the stones had disappeared down to Henshaw in the direction of the Methodist chapels which were being built at the time. His visit to my parents' chapel seemed to confirm his theory.

The local newspaper (the Hexham Courant) has written two articles on the two differing chapels which are located in the hamlet of Henshaw - which is a mile or two further south down from Vindolanda.

My parents own the bigger of the two chapels. Theirs is the Wesleyan Chapel designed to sit 100 people all at one time and here it is described in the local paper here.

The other more "Primitive" chapel is described here. It is incredible to think that such a tiny place as Henshaw used to support two big chapels such as these. Both are now residential homes.

I love the thought that there are some old Roman stones in the family. (Mr. Birley pointed out that the more regular stones are the Roman ones...which makes complete sense. I wasn't there when he was but I like to think that the chisel marks on the stones were made by the Roman legionaries/stone masons. I need to double check on that point. Of course my imagination just runs away with me..!)

The chapel is currently for sale but I would be great to keep it and the Vindolanda stones in the family. Funnily enough through Mr. H's side of the family - some of them are descended from Charles Wesley, brother of John Wesley. So it shows that all sorts of history are meeting together in one place...PLUS it is a good representation of our lives right now - up in this neck of the woods! It is also a fantastic representation of where a lot of Hadrian's Wall ended up....recycled into farms, castles, houses and bastle houses. One of these days I have a superb piece of wall to show you. I just need to pop out one day with my camera...
Scribbled by Hadriana's Treasures at 18:14

You know there was an exam question on the Hadrian's wall, "Where was Hadrian's wall built?' The really smart student answered,"Around Hadrian's garden." This is really true. It must be fantastic to have a chapel owned by the family and I hope it will be kept in the family for many generations more. I think you may be right that the chisel marks could have been really marked by Roman legionaries centuries ago. Makes you have goose bumps just touching the bricks and scratches. Great post

I just love the stones. Imagine touching a stone that was touched by the Romans during the occupation here! If only they could tell a story I bet it would be really interesting.

You are so very knowledgeable about this period, Hade and if anyone deserved to be a Yellow Badge Tourist Guide in this part of the world it is you.

How fabulous that your parents own a chapel but needs must I guess.(re selling it)

It is so sad but archaeologically unsurprising that when ancient structures fell into disuse in past years, their masonry was subject to recycling. This is not only true of Hadrian's Wall - there are many sites across the world where important sructures were dismantled for other uses.

I wonder are they in better condition the stones now that they have been added to the building?

It's all very cool isn't it? I had a friend who lived in Heddon (on-the-Wall) and she had a few bits just sitting there in her back garden. And then there's my birth place, Wallsend, which had the whole of Segedunum sitting underneath all those old tenement houses. Who knew?

Yes...fingers crossed that we can keep it in the family! Hadriana :)