A tenuous connection with the hairy bikers 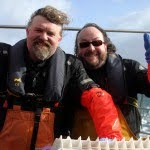 I was watching the telly the other night, or more to the point Mr.H. was as he loves watching cookery programmes, and we were watching those two champion Northern biking foodie boys: Si (who is from the North East) and Dave (from the North West).

Their biographies are very interesting and declare themselves "life long foodies" rather than being trained chefs. I think I like them all the more for this. They work in the TV and film industry and their food programmes are a sideline. Their biogs are here.

For part of the programme they were back in Dave's home town of Barrow-in-Furness. I caught the last two thirds of the programme and luckily caught sight of a wonderful lady (who was with them during the first part of the programme...you'd have to be a regular watcher of the series to understand that one!) with whom I used to work in my banking days. Tessa was part of their programme dedicated to "Show Off Dishes". All her dishes did look divine and amongst which are: Coronation Chicken and Baked Alaska. It took me a while to be sure it was her...but there she is - in all her filmic and gastronomic glory........if you want to see her...she's in first 20 minutes of the programme. She re-appears towards the end when the boys have their big food re-union/banquet in Barrow-on-Furness.

I'm not sure how long it is on the BBC i-player. Here it is: here


I know it's more difficultfor overseas readers to access the i-player...which personally I think is a shame but there you are...

Isn't that amazing...a blast from the past!

If you are reading this, Tessa, please get in touch...it would be lovely to meet up again!

It's kind of prompting me to spill the beans on my City of London banking days....

Have you had any success in meeting up with old friends, former colleagues and more? If so, what is your "poison" of choice? Facebook, Friends Reunited, Twitter, Blogging, Tweeting?........and with whom have you met and what's the best to do it? I'm intrigued.....
Scribbled by Hadriana's Treasures at 11:05

I am renowned for tracking down old friends. I used to use Friends Reunited, but people seem to have migrated to Facebook. It's a very interesting process. The people you think won't even be interested in replying are usually the ones who continue to communicate while those you thought were your best friends can barely remember you.

I caught about the last twenty minutes and thorougly enjoyed it. How nice to see two regular non-poncy foodie people. The baked alaska looked amazing but I did wonder if everyone sitting on the benches got a bit. The serving dishes didn't look that big - but then I am greedy for a generous helping of pud.

As for social networking. I hang around on Facebook looking up old friends and it has been nice to reconnect with some of them again. I love blogger but I only joined Twitter for about a month because I found it mindlessly boringly useless

That's good feedback, expatmum and FF! I've chickened out and not joined any of them...except for blogging. I am incredibly ashamed of my blogging lately as I don't get "out and about" nearly as much as I used to. I keep thinking that I'll manage it when life calms down a bit and then it never does.

Ah well. I'll make it up to everyone some time. ;)

I too love food...but if there's too much food on my plate at the outset it puts me off for some reason....

Tessa's food looks wonderful...I think we should all sneek round to hers...... :)

I Love the Hairy Bikers! Have downloaded a lot of their recipes and the mums' too!

I love the Hairy Bikers as well, Lindsay! Refreshing, uncycnical and unassuming...generous in their comments and behaviour. What more could we ask for?

Hello Hadriana - firstly, don't apologise for not getting out and about more! I don't get out much either (in the virtual sense!) but you can only do what you can do with the time you have available and, for me, I need to use that time to do my own writing, much as I would love to do more reading of others too. The stuff of everyday life keeps getting in the way and so I try and just pick up on a few different people a week, to stay in touch as best I can.

Ditto I do not have much time to spend on Facebook and such like. I don't do Twitter (way too complicated and time-consuming as far as I can see!) but I do have a Facebook account which I created, reluctantly, when far-flung foreign friends seemed to decide it was the only way they wanted to communicate. I'm a pretty infrequent contributor and don't get drawn into all the stuff you can get involved with at FB, but I HAVE found some friends who I long thought I'd lost touch with forever - in truth they have found ME which is even better cos it saved me the work! That aspect of it is really great and it's been fantastic to be back in touch with these people - just knowing that they are still out there and that I can dip in and out of their lives again.