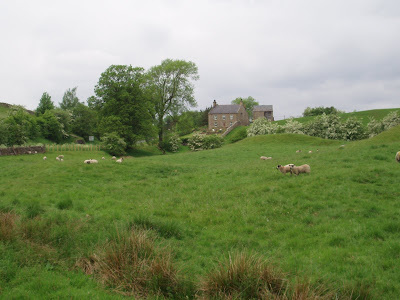 [Photo 1] This is the view looking northwards to Longbyre (it means long or tall barn) taken a few days ago. The countryside is extremely green hued and fantastically luscious at the moment. 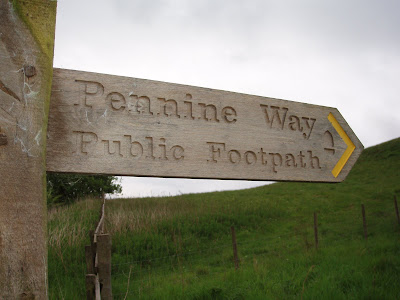 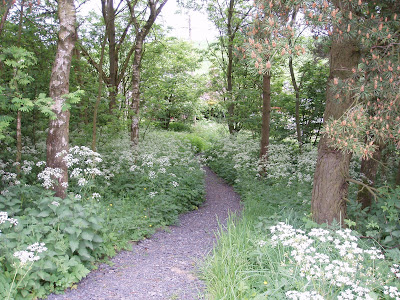 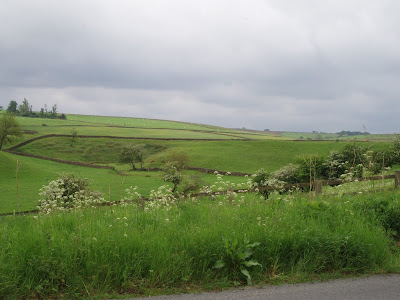 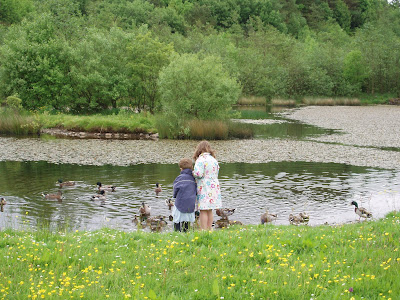 [Photo 2] This sign points out the course of The Pennine Way leading to Haltwhistle Golf Course (which is at Greenhead/Longbyre).

[Photo 3] Followed by a walkway, created by Northumberland National Parks, through the little wood and stream at Longbyre.

[Photo 4] This photo is taken looking westwards towards Gilsland and the North Ditch which I have been convinced (for ages) was the Vallum. North Ditch does not sound as grand as the "Vallum". "Fossa Septentrionalis" is a bit of a mouthful when all is said and done!

[Photo 5] This last photo was snapped this morning over at Walltown Quarry when we fed the ducks. They enjoyed the mist, drizzle and nosh. (And that was just the children.)

These pictures are all taken around/near our B&B, Four Wynds. Let me tell you of some recent tales:

An Argentine planned his trip to Hadrian's Wall this Summer using Facebook for over one month. He decided to walk the trail from West to East. A Chinese lady planned her trip for over one month using Facebook. She elected to walk the trail from East to West. Both arrived at their chosen B&B one night and went online using the free wi-fi facilities (shameless plug). The Argentine logged on and wanted to touch base with the Chinese lady whom he'd befriended through Facebook. "Where are you?" he asked her. "At a B&B called Four Wynds." She replied. "So am I" he immediately typed back. They, then, came downstairs and embraced much to the amazement and amusement of my husband.

Last night also staying with us was the following: an Australian (over 60s) table tennis champion; a Scottish guy (4th from top in the over sixties national (UK) swimming league) who is coaching the lady who is running the whole of the Pennine Way - 268 miles in 7 days! (For more info go to:http://www.justgiving.com/Kym-Hatala-runs-for-Orangutans) That means she is running a marathon and a half each day. They, very gladly, rested their sore feet. Hubbie also got to chat to some other sporty guests who had dived in Hurghada, Red Sea, many, many times. (Hurghada was Hubbie's old stomping ground. He was SO happy to reminisce.)

Last weekend a lady stayed with us so as to meet up with her walker friend who was doing John O'Groats to Land's End plus a chap who walking the same route from the opposite direction. By coincidence they landed up at the B&B that same night.

In May as I drove around the area I twice met Swasie Turner and his Royal Marine comrades who were out collecting money on his behalf as he wheeled himself along the 108 mile route. Apart from all the money Swasie is raising for charity he will also be reporting back to Sustrans who is responsible for the cycle routes in/around Hadrian's Wall and beyond. He will say how wheelchair friendly the route is. Should make for some interesting reading no doubt! Read more about his endeavours here and here.

This all goes to show what a small and incredibly interesting and cosmopolitan world we live in. And very happy we are so to do!
Scribbled by Hadriana's Treasures at 17:34

You don't need to go abroad....it comes to you.
Fascinating...and doesn't your blog look super!

Wow, you do get an amazing variety of visitors there! I will make it one day.

Love the new design for your blog and a nice post too. Did the Argentine and the Chinese lady fall in love? Sounds like the B&B business is doing okay this season which is good to hear.

I love the story about the Argentine and Chinese woman. You can't make up this stuff.

I think I mentioned once that my family and I stayed in Cumbria with friends (Crosby on Eden) and toured the area including Hadrian's Wall, of course. Lovely countryside and people.