Peace and Acceptance at Long Last. 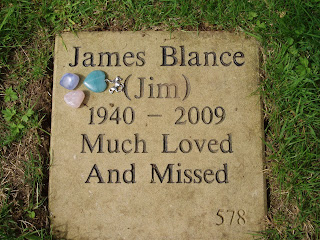 It's just over a year now since my beloved godfather, Jim Blance, died. There's not a day that goes by when I do not think of him and what he brought into my life.
Jim was a fabulous friend and godfather. He was the best godfather anyone could ever have. He was very fond of us all alongside his family, friends, racing horses, music, film, books, funny stories (repeated ad infinitum!), cigarettes, countryside, history, golf, allotment gardening, plus many other things and people.
I remember him part owning at least one race horse when I was little. He used to ask me to design racing colours for his horse.
He was always around. Even when he wasn't in our lives for a few years I still felt that he was there. He was in our heads and hearts.
He was my father's best friend. "Brunna" he called my Dad affectionately. He seemed to be the one who could cope with my father. Jim thoroughly understood him - a complex man who can be a heavyweight intellectual at times. Every Sunday morning they would get together to put the world to rights.
Jim was a simple man. Simple as in tastes and wants only. He too had a fantastic mind. He got into Oxford University from South Shields Grammar School where he and my father first met. My father found out (much later from Jim) that he'd missed getting in to the same college by a cat's whisker. Brunna had been ousted in favour of a chap who'd done his military service (which had been abolished before my father could get anywhere near it).
But I digress. Jim was happiest when he had his boys, John and Ben, his cigarettes, his newspaper, his racing form and latterly, Marj, near him and in his life. Some years after his first marriage floundered Marj (or Marjorie) and he had literally bumped into one another on Hexham High Street around 2001. Marj, Jim's former South Shields flame, was known to my parents too. By amazing co-incidence she and my husband had sat at the same desk in Fairfields Halls Art Centre in Croydon, at different periods but not at the same time. They found they had lots of work acquaintances in common.
And so it all came together for Jim.
Jim was one of the main reasons that I wanted to settle in this region. He had a hugely calming effect on me. You knew you could turn up at any time and he'd make you feel welcome. You knew where you were with Jim.
Masses of people turned up for his humanist funeral. Lots of familiar faces. In fact it turns out that he'd probably taught most people I know, of my own age group, in this neck of the woods. Even more people turned up for his final send-off at Hexham Race Course.
Jim, despite his placability, was a deep pool which revealed the occasional odd ripple. On his deathbed he revealed to me that he'd also taught Dr. Andrew Birley and Justin Blake, the two main archaeologists, at Vindolanda. He'd taught them both at Haydon Bridge High School.
His sudden death coincided with the end of the Northumbrian School Term. Very apt. By all accounts he was a brilliant teacher. He cherished each one of his pupils and lauded their talents and abilities whatever they happened to be. And so it was with me and my sisters and my children.
I visited his grave for the first time last Saturday - the anniversary of his death. We, Jim, and the children, were all alone. The sun shone and I was relieved to know that he lies in a beautifully tranquil spot not far from Hexham Golf Course. A tree is planted beside his gravestone just as it is for each humanist burial. It is all unfussy and straightforward just like Jim. He seems at peace and despite the onset of the terrible pancreatic cancer he had a peaceful and loving death surrounded by his immediate family. Ben, his musician son, sang his favourite song to him as he passed away.
I talk of peace and acceptance because this is where my head and heart are: finally.
We too have undergone many trials and tribulations which are too numerous to recount here. The latest being this data loss. I now realise that starting a business from scratch in the countryside, dealing with the worst economic conditions for the last eighty years whilst bringing up two young children in two properties (!) was never going to be a pushover. Small wonder that at many times I feared for my own sanity.
We weren't sure we wanted to stay here but at the end of 2008 the penny or denarius dropped. We live in an amazing part of the country. The landscape, history and people are mind blowingly mind blowing. We've become part of the community, which is extremely close knit, and have been warmly welcomed into its heart. We've had our ups and downs just like the Nine Nicks of Hadrian's Wall. We've had the very best support from all those around us during our various trials and tribulations. All this has been done in a simple, unfussy and straightforward way. In short, just as Jim would have wanted.
Scribbled by Hadriana's Treasures at 10:28

Email ThisBlogThis!Share to TwitterShare to FacebookShare to Pinterest
Labels: Jim

That was a moving tribute to a super man...and I'm glad you've settled!

I recall your post when he passed away; clearly an important and much missed chap. Hopefully there is comfort in memory though.

Wonderful post and you really do sound as if you've arrived.

What a wonderful post...and glad you've come through all the challenges to get to where you are now...

Every time I read one of your posts, I feel that life has a bit more colo(u)r. Thanks for tinting the hard truths of life with the beauty of it!

Thank you everyone for your wonderful comments. Jim was extraordinary in a very ordinary way. I do miss him. Nevertheless he was very jolly and he'd want me to be very jolly about him and life too!

Hello there, just became alert to your weblog thru Google, and located that it is truly informative. I am gonna watch out for brussels. I will be grateful when you continue this in future. Many people will be benefited from your writing. Cheers!

Many thanks of you to say that Zanil. Much appreciated! :-) Hx