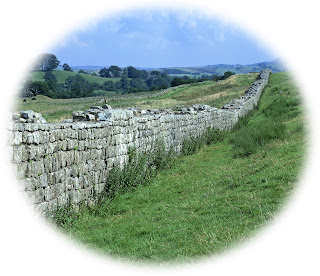 I'm writing this from another computer (the B&B's) and have ten minutes to write this post.

So...I thought I'd throw a few thoughts down.

1. Grandpa South is up with us for a couple of weeks. Hence schedule has gone out of the window. Nice to have him here. Must get his reminiscences about World War II down on paper or video or something. Like his son he has a few tales to tell. Including guarding the Royal Family at Windsor Castle during the War. Hates talking about it but it is all fascinating to hear none the less.

2. We've managed to gather together some photos from the computer crash of a few months ago. I'm looking on the bright side that we didn't lose everything. There is a lot we still do have.

3. The Summer season has been incredibly busy and we've enjoyed it. Bookings beginning to come in for next year already!

4. There are lots of things I do want to talk about but don't want to spoil the broth. I'm too aware and perhaps too superstitious that if I talk about them here before they are ready to be hatched then...everything will go to pot. So I'll talk about them at the right time.

6. Will do an update of my "annus horribilis" (horrible year) some time. I know I promise you lots of things on this blog and then somehow don't deliver. I want to deliver...but it is all in my head and I hope to get them to the page/blogosphere at some point. In my life I do usually achieve my aims (and ambitions) so, mark my words, I'm pretty determined to get them all done. (In the meantime have stopped promising. Maybe watch this space?)

7. You may have noticed that I've started Tweetering or Twittering. Despite my initial scepticism I'm finding it hugely rewarding. If I'm not blogging you'll find me there mostly. Try it. It's good fun! (Haven't quite got to grips with Facebook as yet. Possibly a lack of time?) BTW Stephen Fry is back!

8. The funny thing is...as this country gets more miserable about life in general...I feel that I'm getting more and more cheery about it all. I'm hoping it is age and that I'm getting older and more wiser. Or perhaps just gone a bit daft in the heed? (Southern translation : head).

9. Read recently in my favourite magazine "The Radio Times" a most wonderful paragraph by Eddie Mair of the PM programme on Radio 4 (RT current edition p.133). "Somewhere in the mists of time (ie, I can't be bothered checking) ...Respected financial institutions were collapsing like Chilean mines and taxpayers were bailing out banks with enormous cheques which, curiously, for once didn't take three days to clear." Forget Robert Peston and Nick Robinson ...give me Eddie Mair any time for summing up the financial debacle in a mere 28 words. Sheer brilliance.

(P.S.: Where for great ideas come from? "Go for a walk; cultivate hunches; write everything down; but keep your folders messy; embrace serendipity; make generative mistakes; take on multiple hobbies, frequent coffee houses and other liquid networks; follow the links; let others build on your ideas; borrow, recycle, reinvent." http://www.bbc.co.uk/news/business-11706476 I'll also Twitter this article. There's a short video there as well.)

P.P.S.: I do bank bash I admit it. I'm also trying to do it in a constructive way. I am enthralled by the City of London i.e. by those who made it both financially and physically and historically. Always have been. The banks really do need to pull up their socks. They need to wake up to the fact that they need us...the little guys. The depositors as well as the borrowers. And when they do wake up...I'll stop bashing them.) 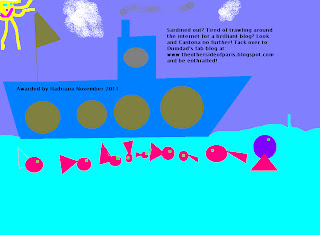 P.P.P.S.: I urge you all to pop over to Dumdad's blog. I've never awarded him an award which is absolute laziness on my part. It is brill. His blog is all that I aspire mine to be. I will scale those dizzy heights one day. I hope. Cheers Dumdad! I hereby convert my earlier virtual award to a real rollickin' good read award! Image created by Little Miss H. Text added by her ma.
Scribbled by Hadriana's Treasures at 13:09

Email ThisBlogThis!Share to TwitterShare to FacebookShare to Pinterest
Labels: Dumdad, Eddie Mair, PM programme, Stuff, The other side of Paris

Well, that was some round up!

I know what you mean about not talking about things one hopes will come off..always seems to put the kibosh on them when you do...so fingers crossed for good things coming your way.

Yes...there is a lot of things I want to talk about but feel that this is not the right time just now.

The suspense is killing me as I'm a really impatient person!!!;)

Hope your plans are going well too. H/C xx

I feel's tho I'm rightly caught up tho I'm sure I'm only imagining it! Good visit with the Grampa and get a recorder going everytime he opens his mouth! You won't regret it!!!
hugs
Sandi

Merci beaucoup for the invisible award - my blog is wearing it proudly althoug perhaps a tad hard to see . . .

Mine a tidy blog?! Perhaps it's just a boring blog without all those bells and whistles. For blogs and for writing I just try to keep it simple and I find that's a perfect fit with my brain.

I've just read the added par on your blogpost - you are too kind. Unlike Harry Potter, I need a visibility cloak to throw over your award so that I can see it!

DD: The pleasure is ours (the Hadriana Family). Sorry that I have been so dilatory but it is there. 'Tis yours. (Maybe I could start a new trend a design a unique award for each recipient of each blog? Would be nice!) Enjoy!

Many thanks for the lovely award. And there's an award awaiting you on my blog.

Not bad for ten minutes. I can just about pen a paragraph in that time.

Thanks for the update...I feel breathless at the end of it....keep bank bashing...it's the only way!

DD: Ooh. I missed your comment before about the award so will pop over asap. Exciting!

Mark: Yes..it started off as ten minutes and then I kept adding bits so it was probably two hours by the end of it. You've sussed me. ;)

Very many thanks for the unique award Dumdad. It's there on my side bar. I'm very honoured to be awarded a Dummy award. I'll wear it with pride! :)

I've so enjoyed designing (with Little Miss H) Dumdad's one off award that I've decided to keep doing it. At least once a week I'll choose a blog to write about and award a specially created award just for that blog. It shall be fun! :)

Hey: I love the idea of recording Grandpa's reminiscences down on video. I wish that was an option with my own grandparents back in the day. Great post.
Well done. :-)

Glad to hear you have had a good year Hadriana and on track for 2011. Also good news about Vindolanda.

I haven't been blogging much lately but am making myself do one each day through November. I do not understand Facebook but haven't tried Tweeting yet!

You are right. We should do it. He's only up here for a few more days. Even he jokes (he's 88) that he might not see many more Christmases. I hope he does though! :)

I'm very excited about the Vindolanda Dig. It'll be very interesting to say the least! I'll definitely pop over to yours.

I think it's OK to Facebook, Tweet and blog...it's just having enough time to do them all justice. That's the hard part! ;)