Cheers to a Peaceful and Prosperous New Year! 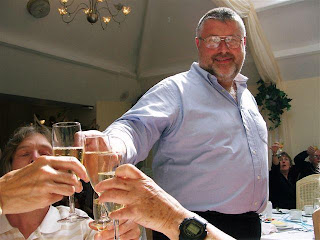 Snow here again today. Just as things were getting back to normal.

I can't get my head together at the moment. Too much is going on.

We've decided to rent out out Haltwhistle house. We've now got to decide where we are going to live (the children and I).

We're OK. We're fine. Enjoying being together at the B&B for a while.

Things in boxes and bags again.

Organising courses. Sorting out other stuff.

Too much to tell. Too little time. Sorry.

(Above is a photo of Nigel (Mr.H.) at our son's christening party and all our friends.)

P.S.: Re: Bonkers Financial System - Listen to this if you can (it's available until 3pm next Friday - Radio 4 i-player): http://www.bbc.co.uk/iplayer/episode/b00k9p0w/Afternoon_Play_The_Great_Hargeisa_Goat_Bubble/

The Great Hargeisa Goat Bubble was the first short story to be published in The Financial Times. Written by the Irish comic writer and blogger on economics, Julian Gough, winner of the BBC National Short Story Prize in 2007, it is that rare thing - fiction which delves into the world of derivatives, arbitrage and futures. Set in Somaliland, at a moment unspecified, when markets were fully de-regulated, it follows the fortunes of one Dr Ibrahim Bihi, a leading economist and the man who woke up the sleepy goat market of Hargeisa with his 'glorious notion'. Now marooned on a snowy station platform in England, Dr Bihi relates his tale of triumph and tragedy to a young Irish orphan named Jude, and along the way illuminates ideas of profit and loss, boom and bust, securitisation and futures. With the help of the BBC's Economics Editor, Stephanie Flanders, Dr Bihi interprets the mysteries of modern economics and follows the follies of the market to their logical conclusion!


Hugh Quarshie, star of the RSC and famously Ric Griffen in Holby City, plays Dr Bihi and Sam O'Mahony-Adams plays Jude. With Stephanie Flanders as herself.

Adapted by Julian Gough from his story of the same name. The director is Di Speirs.

[I need to listen to it again myself. It's definitely a parable for our times. 99.9% of bankers would agree with the contents of this. Believe you me. That's why it was published in The Financial Times.]
Scribbled by Hadriana's Treasures at 10:33

I've started...and then stopped because it will be much more fun to wait until Mr. Fly wakes up and listen to it together.....if he will be able to stop harrumphing at it, that is...
He was in the City before the banks got their hooks on the Stock Exchange and reckons things went sharply downhill honesty wise from that moment.
While as for modern economists.....harrumph!

Good luck with your multifarious projects...and do try to take a little time for yourself too.

That sounds interesting - I will have a listen later.

Happy New Year to you and yours - I look forward to hearing what you are up to when you have time to tell us.
xx

Yes. I managed to listen to it - mostly - but there were a few interruptions. So will try again this week.

My plans (at the moment) are to introduce the Minimus course to 3 primary schools locally. I've been visiting all the schools to do that...

I'm intrigued - Can you get BBC i-player in Costa Rica? That's amazing if you can! Thanks for your good wishes.

Happy New Year to you too! My plan is to get the Minimus courses up and running commercially too. Am working with a business adviser on that.

I'm sure the housing problem will resolve itself some way or t'other.

I've got so many thoughts and plans...it fills my head up! Hopefully I'll be able to tell you about some of them! :)

Happy New Year! Your life seems as busy and complicated as ever. All the best for a prosperous 2011

All that packing sounds daunting.
Happy New Year & may 2011 be good to you and yours.
Maggie X

I can, by downloading something called Expat Shield which gives me an IP address in the UK...I'm sure it's either illegal or immoral but as I can listen to TMS with it...legality and morality just went out of the window.

I'd be happy to pay a licence fee and listen and view legally...but that doesn't seem to be an option.

Happy New Year to you and yours. 2010 will always be the Year of Hadrian's Wall for me. Looking forward to new adventures in 2011.

Many thanks NB, Maggie! Same to you! Fly...yes - I don't see why they cannot make it available worldwide to selected parties as you suggest. Having lived abroad - the Beeb can be a lifeline at times. We used to listen to things via the computer in Egypt. Can't remember how we did it but it sure helped at times...

Idaho Dad - I look forward to hearing your adventures. :)

Happy New Year to you too Hadriana. I hope 2011 is a wonderful year for you. A x

Happy New Year to you too.

I'm up in the middle of the night -saying "Happy New Year" to you too! Not sure when I can be over to your blogs but I don't forget you all. When things calm down (?!) I hope to do so.... Hxx