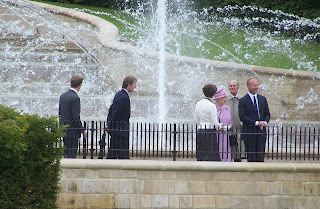 This is a photo taken of the Queen and Prince Philip and the well known local footballer, Alan Shearer, amongst others at Alnwick Gardens, June 22nd 2011. My thanks goes to a friend, Lynn, for providing this marvellous photo. (Direct link to Alnwick Gardens here.) [Nearby Alnwick Castle was a setting in some of the Harry Potter films.]

It was a very enjoyable day and a good time was had by all. It was nice to dress up for a change and the weather held good at least whilst the Queen was around...


We, at Hadriana's Villa, have a few tenuous regal connections....my husband, Nigel's father (who is still hale and hearty), spent part of World War II guarding Princess Elizabeth and Princess Margaret at Windsor Castle. Our daughter, who likes lots of stories relating to Kings, Queens, Princesses and Princes...loves to get him to recount his memories of those times.

Nigel, during his days at the Barbican in London as House Manager, looked after all manner of Royals when they attended receptions there. There is one particular story which he will not tell - at all, at all (such is his devotion to the Royal Family). Needless to say it was all swiftly resolved thanks to his superb organisation...

and talking of organisation....I imagine that there are going to be a few Diamond Jubilee parties over the next few days and as such we'd all like to wish everyone an exhilarating Jubilee weekend! Look forward to hearing your stories over the coming days and weeks! Party on!

We party, therefore we exist!

Scribbled by Hadriana's Treasures at 20:22