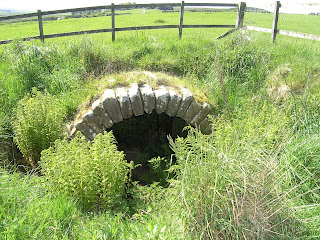 Great Chesters (Aesica) is a great little fort. It sits on farm land along the line of Hadrian's Wall. So it can be officially termed a 'Wall fort'. I've not been back for ages and must do so some time. Here are some pictures of it on the internet which I have not studied yet but look interesting: here.

This is (I'm told) the top of the strong room popping out of the greenery (as in photo above). It has an air of neglect which adds to its charm. In my head I've nicknamed it "The Miss Havisham Fort" on Hadrian's Wall. This link in Wikipedia describes it in more detail. A hoard of treasure was found in the West Tower of the South Gate in 1894 and I quote from there:

Excavations were carried out in 1894, during which the ramparts were cleared. The west tower of the south gate was found to contain a hoard of jewellery, which included an enamelled brooch shaped as a hare, a gilded bronze brooch described as a masterpiece of Celtic art, a silver collar with a pendant, a gold ring and a bronze ring with a Gnostic gem. During this excavation the headquarters building (principia) was partially uncovered, together with its vaulted underground strong room. A barrack block was also found to the south-west of the principia.
In 1897 a bathhouse was discovered, 100 yards (91 m) to the south, east of the branch road to the Stanegate. It includes a dressing room, latrine, cold room with cold bath, dry-heat room, warm steamy room and hot steamy room.

There is this interesting short film created by the British Museum  (3 mins.) here which also talks about the complete border around the Roman Empire as created by Hadrian. His stone wall in Northern Britain played a part in his grand plan of protecting/limiting the Roman Empire at its very height.

There is a very good Timewatch BBC programme on Hadrian's Wall (if you have 48 minutes to spare). It gives you an extremely good overview of 'Life on the Wall' in the times of the Romans.

Scribbled by Hadriana's Treasures at 17:34

How I wish I were there this year! I finally wandered through Great Chesters a few years ago after many Wall visits. I agree, the air of neglect is kind of charming. And so many questions -- what's under that turf??

Been out of touch with your blog for far too long. Must sit & catch back up. Hope all is well with you & yours. Life good on this side of the Pond. Still ardently collecting, cataloging, & fighting the flotsam washing into our shores. I don't see how anything outside of a ground-up change in how we do business is going to have any effect. But I do what I can.

I echo the previous comment. I would love to walk along the wall again. I so enjoyed the two times I have done so before. I can't help but imagine what the Romans felt as they stood on sentry duty in freezing conditions waiting for the Scots to come charging over the horizon.

Thanks a bunch for your comment. I'm so out of touch with many things...life is so busy...so apologies from this side of the Pond!!! I constantly wonder what is under the ground when I walk everywhere (and particularly here).

Must pop over to your blog some time. Hope you are well. I think of my blog pals all the time. :-) Hxx