The Sound of Music in Coquetdale 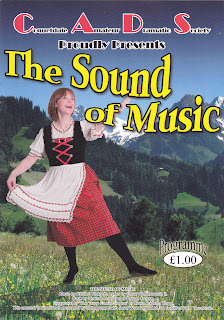 Last Sunday we went to the first performance of 'The Sound of Music' over in Rothbury...which is further into Northumberland.

We've been over to Rothbury before. It's a lovely place. It's a proper market town - with some wonderful shops in a very beautiful setting. We always try to call into the very delicious Tomlinson's cafe, an enticing art gallery, The Crown Studio which is also home to Potted History (hello you two!) and have a wander round....

We got there for 1pm and settled ourselves into our seats at the Jubilee Hall. Just as well we got there early as the hall (and it was a big hall) was fast filling up.

The local amateur dramatic society, Coquetdale Amateur Dramatic Society, to give it its full name..was putting on this musical. My daughter loves the film a huge amount so we all know each song off by heart (well almost nearly).

We were very impressed. It was an extremely polished production. The singing and the acting were marvellous. We were particularly bowled over by the children's performances as the whole show lasted two and a half hours.

I'd helped a bit with the Latin pronunication on the following songs - 'Preludium', 'Alleluia' and 'Gaudeamus Domino' et cetera where the nuns were singing. As such I felt very proud of them!

The stage was a tiny bit on the small side and as such - each member of the cast coped admirably..with the scene changes. I liked a particular scene where members of 'high society' waltzed around and with each other in their glittering costumes.

The leading lady, Linda Milburn, cast as Maria, I thought, was inordinately good. I preferred her to Julie Andrews. Can we re-cast and re-shoot the film now please?

The scenes which stood out for us...involved audience interaction!...The nuns did their procession, in a very serene way, down the hall to the stage and the 'bad guys' shone their torches on the audience when they were looking for the runaway von Trapps. My daughter decided, by the end of the show, that she wanted to play the character of 'Gretl' - the youngest!

By coincidence I watched a TV programme recently which recounted the true story of Maria and the von Trapps...how the family ended up in America and what they did there eventually. I always enjoy hearing different accounts of stories...it helps me understand what is going on...and to try to see things in a different light. It's probably the historian in me!

My fave is "How do you solve a problem like Maria?" Drat - I'll be singing that all day now.

When I was little my mum had the album with all the songs on. I knew them all by heart!!!

I heard someone call these tunes that we can't get out of heads..."earworms" and quite honestly it's the image of a worm in my ear that I can't get rid of!!! ugh!

I could never see the attraction between Julie Andrews and Christopher Plummer. Bogart and Bacall - yes; Tracy and Hepburn - yes; Cary Grant and just about anybody - yes....(!) But Andrews & Plummer....ho di hum or 'do ra lo so fa mi' something or other......

No! Not The Sound of Music!

I'd be heading for the hills at the first squawk of music....

I know it all by heart as I had the album when I was young & I've seen the film many times!
I know it makes some crawl up the wall, but I always loved it.
Maggie x

The very mention of Rothbury brings such emotion - I lived down the road for a number of years. I can see the Simonside Hills now - must, must, go back soon.

Many thanks Maggie, ADDY and tbs...sorry for the late reply as have been away.