We also talked about the legend of the golden table. A widow's son will break the spell and release the keeper of the golden table plus the table itself! For further information click here: Thirlwall Castle History (Romanticism, Reivers, Parliamentarians, Earl of Carlisle and more.)

For conservation of Thirlwall Castle please click here: Robin Kent/Soft Capping
It is also rumoured that there is a tunnel between Thirlwall Castle and Blenkinsopp Castle which is nearby...the name of Thirlwall lives on in Nine Nicks of Thirlwall (now Seven due to the extensive whinstone quarrying) and Thirlwall Parish Council and the surname Thirlwall. (My old French teacher and a Little Mix band member spring to mind. I do not think they were related....!!)


Neolithic Origins/Roman/Christian/Norman/Reiver Bewcastle
Bewcastle (also known as Fanum Cocidii, the Temple of Cocidius) has been the centre of religious life since before the time of the Romans. Traces of burial mounds, cairns and the remains of hut circles date settlement to the Neolithic period (4000-2000BC). There is also evidence of habitation in the Bronze Age and Iron Age. The natives worshipped Cocidius who has been associated with the Roman god, Mars. A local Cumbrian historian, Diane McIlmoyle, who goes by the name of Esmeralda, has produced a great series of posts on Bewcastle/Cocidius/Cumbrian locals at Bewcastle.
Here is her post: Cocidius-Cumbrian God


Silver votive plaques showing Cocidius, found in the strong room of the Roman fort, can be seen at Tullie House Museum in Carlisle.
Please note there was also a Bewcastle Cauldron (which pre-dates the Romans)...also written about by Esmeralda. The real thing can be seen at Tullie House.
The Romans were good at hedging their bets and adopted local gods...here they have matched Cocidius with Mars (God of War and Hunting) but Cocidius is also associated with the God of Forests, Woods and Trees, Silvanus (we know him as "The Green Man"). They built their turf and timber fort in an unusual hexagonal shape (rather than that of a rectangular shape) over the site of the original shrine to Cocidius. Its headquaters and gates were made of stone. Fanum Cocidii is a Hadrianic Fort (and an outpost fort alongside those of Netherby, Castra Exploratorum, and Birrens, Blatobulgium) to Hadrian's Wall via Gillaleas Beacon Roman Signal Station. It was built in AD122-124. The original garrison came from Dacia (modern Romania). They were later replaced by 1000 Nervians from Germany and 250 cavalry.  It is an unusual hexagonal shape, as previously mentioned, and one of the biggest forts at 6 acres.
To get a sense of the scale and see the size/shape of the fort - have a look at it using Google Earth. (Some of my links also show these.)

After the Romans
After the Romans left (or not - as the case may be - please see a timeline here)...Bewcastle continued in a religious sense by possibly having a small monastic cell present within the Roman fort walls and hence the very fine late 7th century (c. 675AD) Anglo-Saxon Cross was built. It is made of sandstone and stands at 14 feet high. Like Roman statues and inscriptions it too would have been vividly painted. It is missing its cross head. (Its sister cross retains its cross head and to a certain extent is better preserved. It was broken up and buried so was not so weather beaten. Nevertheless the Bewcastle cross is absolutely splendid. The resident vicar at Bewcastle, Reverend Rob Brown, did a fantastic job of deciphering what the drawings and the inscriptions all meant. There are different interpretations as the Anglo-Saxons liked their puzzles apparently...


The converted barn museum (within the church cemetery) is definitely worth a visit as it explains the Anglo-Saxon Cross and the site of Bewcastle (in all its manifestations in great detail). 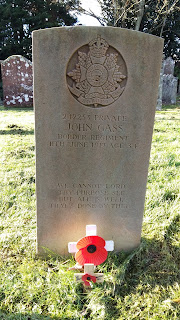 A touching reminder in St.Cuthbert's cemetery (this being Remembrance Sunday) of the different communities who lived and died at Bewcastle and elsewhere in different wars down the ages.

Further information about Bewcastle and the Anglo-Saxon Cross can be gained from leaflets inside St. Cuthbert's Church and Reverend Rob Brown.

The incredibly informative Bewcastle website www.bewcastle.com  is in the process of being updated.