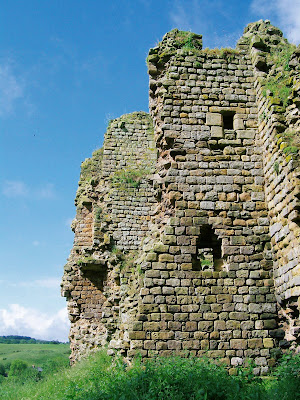 I often read the local newspaper, The Hexham Courant, to keep abreast of local news and stories. Quite often tales abound in and around Hadrian's Wall. The second section is where local history stories are reported.

I quite often have a pile which I haven't read. Sometimes it feels like having homework but when I do find the time to go through the past editions I find some wonderful jewels like this one:

Have you heard the one about the self-wiping dipstick? By BRIAN TILLEY

MENDACIOUS mixer of medicines, Martin Merriman, is Tynedale’s top twister of the truth.

The bearded blusterer from behind the counter at Boots at Haltwhistle out-yarned a very talented field of fibbers at the inaugural Tynedale Tall Tale Telling competition at Whitley Chapel on Friday night.

His tale of intrigue, murder and mayhem involving the invention of the self-wiping dipstick enthralled and hugely entertained a packed village hall on a wild and windy night.
The competition was staged by Hexham Rotary Club, on the lines of a long established lying contest in Cumbria.

Event organiser Collette Drifte was delighted with the turn-out, and with the quality of the whoppers spun by the eight-strong field of purveyors of porkies.

While the profits are still being finalised, the Smile Train charity, which provides a mobile surgery to correct incidences of cleft lips and cleft palates in the Third World will have benefited to the tune of several hundred pounds.

However, they were unanimous that Martin’s Ananias impression was the cream of the crop.

His was a tale of a farmer, Geordie Reed, and his wife, Maisie, who ran a farm in the West Allen Valley “way up in the hills above Mohope, just below the snout of the Carrshield Glacier, at round 13,000 feet.”

This was a place where sheep give birth to lambs with their front legs shorter than the back ones, to help them up the slopes to the high pastures where they wander around wondering how they are going to get back down again.

You can also spot that rare breed of cattle, the Sparty Lea Longhorn, which in turn have their two left legs shorter than those on the right, to help them lean against the wind.

Martin revealed that Geordie was a stotty farmer, with a lucrative contract supplying Gregg’s in Hexham with particularly small but perfectly formed stotties, spending many hours laying traps for them at their regular watering holes near the Gin Gang Hush.

He also used to scour mud from the dyke backs, mixing it with water from the Winney Syke to form a slurry, before exporting it down the valley to a well-known mud wrestling club in Priestpopple, Hexham.

His invention came about because wife Maisie became fed up of his habit of wiping the dipstick on the sleeve of his overalls after checking out his grey Fergie before setting out for TVO and oil.

Marital harmony was only restored when he invented the self-wiping dipstick.
Foolishly, Geordie shared his blueprint with Martin over a pint in the Carts Bog Inn.
Martin revealed: “He’d heard that I’d got a degree in slurry maintenance from the University of Nenthead and he thought I’d be the ideal man to help him develop the invention.”
The upshot was that Martin sabotaged the brakes of Geordie’s car, so that he came to a sticky end on Staward Bends, and people from as far away as Catton and Ninebanks came to pay their respects at his funeral.

Martin registered the invention as his own at Acomb Patents’ Office, and after having saturated the market in Tynedale with dipsticks, he expanded into the Nissan plant at Washington.

He claimed: “Within a week, a helicopter landed in the stackyard and a couple of Oriental fellas got out and offered to buy me out, there and then.”
Formula One supremo Bernie Ecclestone was soon involved, he collected £100,000 from Dragon’s Den and received a hero’s welcome every time he touched down on the fifth runway at Slaley International Airport.

Eventually though, the widowed Maisie twigged George’s demise on the Cupola Bridge was no accident – so Martin was obliged to run her through with one of his dipsticks, after lulling her into a false sense of security with a couple of bottles of Chateau Slaley Hall, and then sliding her body beneath the dark waters of Langley Dam.

Of course, cheats never prosper, Martin was found out, and lost everything.

And he reported from his prison cell: “I had had it all – success, fame, riches, fortune, (I even had Maisie) but instead, through my own devilish greed, lust and covetousness I had lost everything.
“What a dipstick!”

.....It is hoped that the competition will now become an annual one – and that’s no lie!

Martin is our local pharmacist. That's no lie either! He's a lovely man. Unassuming, cheerful and very helpful. Somehow he embodies the spirit of what is like to live up here. Everyone and everything has a tale to tell....

There are a lot of local references. The tale is very amusing in that way. Are there any local traditions dying or reviving where you are? Any local and/or colourful characters? Any interesting surnames? "Merriman" seems a fantastic name for a spinner of yarns. He's also chosen "Reed" which is an old Reiver surname....or does Merriman become the "Reiver"? Very clever indeed.

N.B.: Reivers were the cowboys/bad guys of the Border lands...it is from where we get "bereaved" and "blackmail" for starters. I'll post more on this another time!
Scribbled by Hadriana's Treasures at 12:38

LOL - I will have to go back and read the rest, I could not get past the "self cleaning dipstick" and the author's last name "Tilley". My ex-husband's last name? Tilley; Adjective used to describe him at times... well I am sure you guessed!