A Good Luck Symbol for all ye writers, scratchers and scribblers... 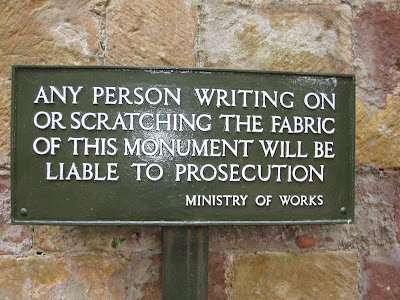 I love it...hence the photo.

I don't mind anyone writing or scratching on this monument (as long as it is decent!).

Something which isn't regarded as too decent (nowadays) is this........ 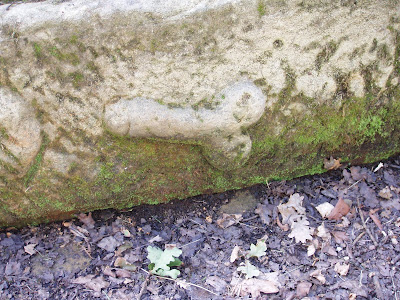 But they were regarded as perfectly acceptable by the Romans who saw them as good luck symbols meant to ward off evil. As you walk along the Wall you will see lots of them especially at forts.

Hunter Davies made a special attempt to find this one (the one in the photo) over at Chesters Bridge Abutment.

"It was one of the first things I searched for, but I was having no luck till the occupants of the land rover emerged, now that the rain had slackened. Three middle-aged workmen appeared with rakes and began sweeping the last of the autumn leaves, silently and separately, lost in their own thoughts. They were obviously council workmen. I said excuse me to one of them, where's the phallus. 'Follow me,' he replied, showing no surprise. 'Here's the fellow.' And he was a fine fellow indeed, plump and well formed, with two neat testicles, beautifully carved on a stone facing the river. 'Magnificent workmanship,' he said, beaming.

Transcribed from: p.66/67 The Chapter on Chesters, A Walk along the Wall (A Journey along Hadrian's Wall) by Hunter Davies. (First printed in 1974.)
Scribbled by Hadriana's Treasures at 14:17

There's nothing more amusing than a good old fashioned cock and balls :)

now i'm seriously going to be on the lookout for them when we come up this summer.

Who knew those things were good luck?

Hee hee, fabulous. We should maybe have a competition to see who finds the first set/pair/bunch...Hmmm, must google collective noun for cock and balls. :D

I put a picture of that in my holiday photos album once and the girls at work were shocked ;-)

Yes...these days it is a bit risque but hey..what the heck! It's January (from Janus..the God of Doorways and gates...with two faces - looking forwards and looking back) and we need to have a bit of a smile. Don't we? ;)

It takes a bold lady to walk up to a strange man and ask "Where's the phallus?"

I know I am slow at times but I've just worked out who...the first commenters are: Dan, Jo, JJ Daddy-O are all walking Hadrian's Wall in July 2010 for charity. Good luck to 'em and follow them on the "all that comes with it"...blog. (The link is on my sidebar.)