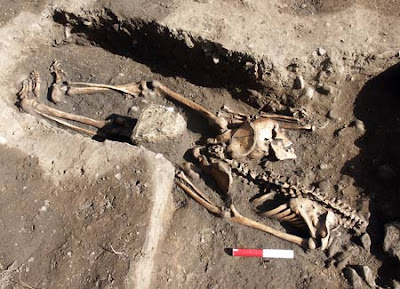 Check out the following:

COULD YORK’S HEADLESS ROMANS BE GLADIATORS?York Archaeological Trust is throwing down the gauntlet to would-be archaeologists to see if they can solve a puzzle that has sparked debate about human remains unearthed in York almost a decade ago.

The Trust will launch a website next week – www.headlessromans.co.uk – presenting all the evidence and inviting members of the public to make up their own minds
“Another potential interpretation – that they are all criminals – appears to be undermined by the substantial respect (and grave goods) with which many of them were buried.”

“This is a fascinating discovery that gives a real insight into the world of interpreting archaeology,” says York Archaeological Trust Chief Executive, John Walker.

“With archaeology, you are very rarely dealing in the definite. There are almost always elements of ‘possibly’ and ‘probably’ and the archaeologist’s job is to weigh up the evidence and make an informed judgement on the most likely explanation.”

For your chance to look at the evidence and make your own decision, visit www.headlessromans.co.uk from Monday 14th June. ‘Gladiators: Back From The Dead’ will be shown on Channel 4 on Monday June 14th at 9.00pm.
For more info: www.headlessromans.com
Scribbled by Hadriana's Treasures at 11:45

Thanks for the tip.

What a great idea...I'm sure there'll be some imaginative suggestions, some of which may be of more value than others....

How interesting it all is. I shall look out for the programme Hadriana, thanks for letting us know about it. A x

Oh I do love answers to things like that.I am just in time to see it. Thanks for the tip.
Maggie X

I have recorded the programme and will watch it as soon as I have a chance.

I'll be watching C4on demand, sometime soon, for that one!
xxS

Thanks everyone for taking note of this. I did watch it and I felt a bit squeamish at times. It certainly taught me a lot more about the gladatorial world and what they went through.

General word that sums it up: Ugh! (But very fascinating through!!)