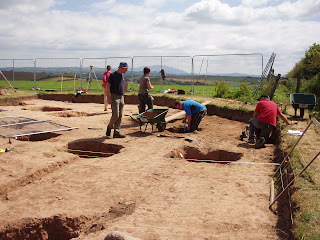 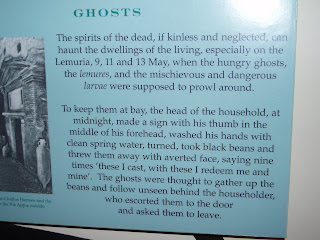 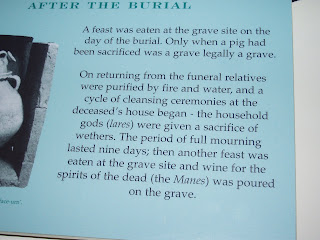 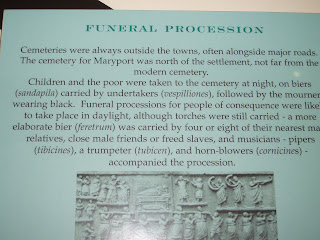 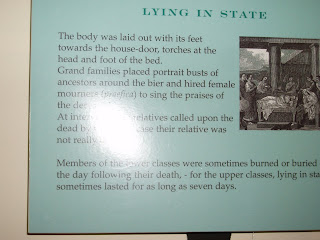 The day before yesterday I took another trip across to Maryport (some beautiful photos in the Maryport link) to the Senhouse Museum. The day was arranged courtesy of Hadrian's Wall Heritage Ltd. as part of their annual Know Your Hadrian's Wall Country Programme.

I've written about Senhouse and Maryport before (when I last visited 3 years ago) here, here, here and here.

Maryport  (Roman name: Alauna - possible meaning "shining/brilliant" relating to the river) is not on Hadrian's Wall per see but forms part of the Cumbrian complex coastal frontier set up by the Romans from Bowness on Solway (the Cumbrian end of Hadrian's Wall) down to Maryport - about 26 miles of coastal defences: It's a much overlooked part which I, myself, would like to investigate and know more about. Maryport was also linked by road to Papcastle and Carlisle, and by sea to Chester, the Roman's legionary base in North West England. At Maryport there is the Senhouse Museum which houses the Netherhall Collection.

There is an incredible amount to tell you about and I don't have the time (or enough space) to tell you everything so I will provide you with the relevant links:
Senhouse Museum (which includes Tony Wilmott's archaeological blog on the Maryport digs and latest news)
and further 2011 blog info here
Plans for Development at Maryport/Senhouse Museum
Further info on multimillion development plans
Current Archaeological Digs at Maryport
Archaeological Dig 2011 Programme of Events

Quote from one of the above links: 'Among those who campaigned for the Maryport Scheme is Jane Laskey, manager of Maryport’s Senhouse Museum, which is situated in front of the fort site.
She said: “Hadrian’s Wall was only part of the frontier. The fort at Maryport was designed to stop people nipping round the wall from the Scottish side.
“The whole process of discovery here in Maryport will be an exciting process. Fortunately, the fort site hasn’t been built on."'

The Collection takes its name from Netherhall, the Maryport home of the Senhouse family, now in ruins (the ruins can be seen in the first link in this blog for Maryport). During the reign of Elizabeth I, John Senhouse began to collect inscribed stones which he found on his land. Further generations of Senhouses added to the collection, and in August 1870, 17 Roman altars were found, apparently deliberately buried  (?)* by the Romans some time in the late second or third century AD in pits north of the fort. Maryport, in Roman times would have been an extremely cosmopolitan place - due to its sea links (as would have been South Shields, Arbeia, my home town!)....

This collection is famous all around the world and a lot of scholars have paid a great amount of attention to it. The Victorian excavators, led by Humphrey Senhouse, found 57 pits - 9 of which contained altars. The conclusion by these excavators and Wennan in the 1930's was that the Roman altars were dedicated by the Roman Military and ritually buried on an annual basis.

The day we were there it was baking hot. In fact there had been little rain there for the last five/six weeks. When I left at the end of the day the temperature in my car registered 30 degrees! We were shown around the museum by Professor Haynes, Head of Newcastle's Archaeological Department (& Project Director) and the dig itself. Tony Wilmott (English Heritage), Site Director, spoke to us at the end of the tour of the dig and Jane Laskey, the Museum Curator, spoke to us about the history of the museum.

* Both Professor Haynes and Tony Wilmott explained that the dig was testing the "annual dedication and ritual burying" theory of the Victorian excavators (as this was the first time since the time of the Victorian excavators that that particular area had been re-examined). On the whole, from the evidence of the dig so far, they were tending to disagree with that theory believing instead that the altar stones had been re-used by the Romans and had been used as foundation stones for (an) impressive timber building(s) - possibly a temple? Very little domestic pottery had been found on the site so far so the exact purpose of the building has yet to be ascertained. It was built on the highest part of the ground at Maryport so it is possible that it may have been built on something which had had great significance...Could it be a conspicuous monument onto which the Romans had built? Again they emphasized that these were purely speculative theories...further digs at Maryport may reveal more information.

All in all fascinating stuff. I thoroughly recommend a visit to the Senhouse Museum to see this marvellous collection of Roman altars and other stones. It is small and very compact but all the more delightful for it. The dig will be backfilled at the end of this season. (If you can - go and hear the talks there tomorrow night...they will be well worth it!)
++++++++++++++++++++++++++++++++++++++++++++++++++++++++++++++++++++++
N.B.: Just been over to Hadrian's Wall Heritage Ltd.'s offices today (Monday 18th July) and we were given another update on what is happening over there. A new state of the art museum (as per article above on planned redevelopment) is planned at Camp Farm (on the same site) with a special residential block for the archaeologists. (We saw the graphics and it does look marvellous!) Annual excavations are planned for each year and volunteers will be invited to join the digs. The site (in its new form) will look truly amazing. As there has been very little excavation there since the Victorian period - there is potentially lots to be found. They are hoping that they can get started with the whole project soon once it gets past the planning stage. Let's hope it does go ahead (they've got half the funding in place for the whole project already)...as it'll be another great boost for the region...especially Maryport. :)
Scribbled by Hadriana's Treasures at 08:04

Got a chance to visit Maryport and Senhouse back in '09 and it was a great trip. The museum really is special. All those annual dedication stones tell a fantastic story. And the clifftop location is storybook. I found that I really liked Maryport too. It felt, well, "normal." Wasn't trying to be touristy-- wasn't trying to be anything. Just a fairly healthy if slightly ruffled normal town with a cool history. Thx for the pictures & stories bringing back great memories!

The dig is very interesting. I find the whole place (Maryport) very interesting - it has much history there, as you know, besides the Roman stuff. Of course I love the Roman altars and stones too...I just hope the planned redevelopment does not change the character of the place too much.

The coastal views are out of this world! Glad you liked the post. There are some more digs planned for next year...so watch this space! :)

A dig is always exciting and its something I always used to thing I'd like to do. Bit late now with all my aches & pains.
Maggie X

It is good fun and yes - it can take its toll - especially on journeys to/from the spoil heap! :)