A Visit to Corbridge - 'Corstopitum or Coria' 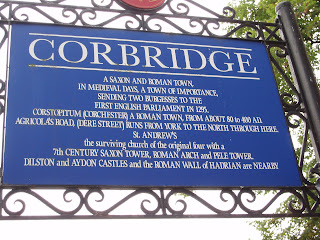 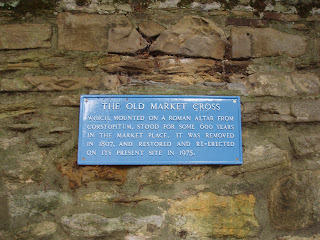 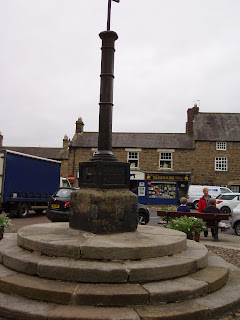 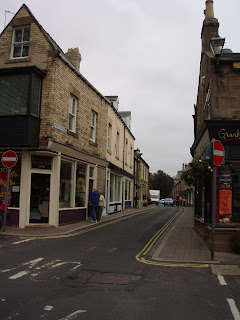 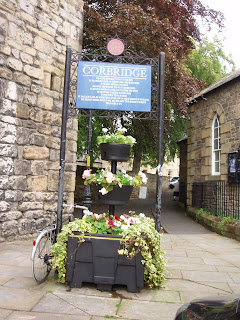 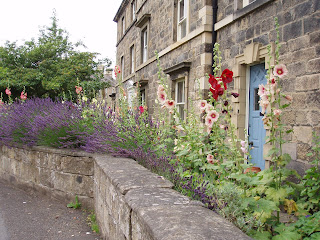 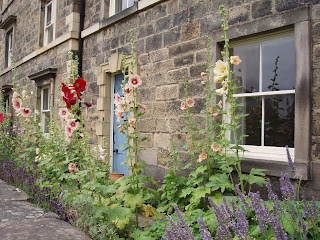 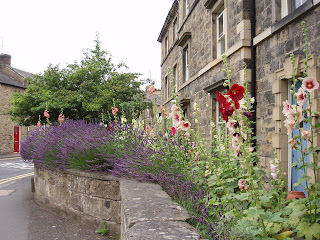 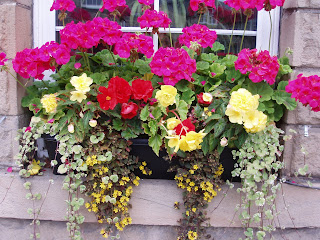 I'm letting the photos tell the story.
(The history of Corbridge can be found here and here
Roman history junkies can find out more here and at the Roman-Britain site
Just click on the Dere Street link in the next paragraph.)
A wonderful Roman fort and garrison town can be found just outside of Corbridge.
The town and fort were/are situated on crossroads of Romans roads: Dere Street (which became known as Watling Street and there is a street called Watling Street in Corbridge still) and the Stanegate.
I first heard of Corbridge at school when my French and English teachers lived here. Interestingly my French teacher was called Mrs. Thirlwell and we now live within a stone's throw of Thirlwall Castle.
Corstopitum or Coria? Which one was the true Roman name for Corbridge? We don't know for sure as Corstopitum was used but due to the discovery of the Vindolanda Writing Tablets it was found that Coria was the name that the Romans gave to this place (at least in the tablets).
Corstopitum = 'The Valley of the Resounding Noise' ?
"The names Coria from Ptolemy and Corie from the RC, may be derived from the same Celtic roots as the Gaelic word Coire 'a round hollow in a mountainside', and the Welsh word Cwm 'valley, dale'; both words adequately describe the location of the Corbridge station. The Antonine name Corstopitum, is possibly a Romanisation of the original Celtic name suffixed by the Latin word strepitum 'loud noise, resounding', the Roman-British name therefore meaning something along the lines of 'The Valley of the Resounding Noise', a name which undoubtedly reflects its use as a busy legionary garrison post close to the troublesome Scottish border region." (quoted from the website:
http://www.roman-britain.org/places/corstopitum.htm)
The small child in me always thinks of the "Carry On!" films..."Cor! Stop it! 'Um !" every time I see/read the word - 'Corstopitum'. Coria, as a name, is far more sensible - don't you think?

Corbridge is a very attractive town - a lot of the stone in the houses is Roman. Today (as there must also have been in Roman times) there are pubs, restaurants, cafes and quirky shops plus plenty of history. I think I still need more time to wander round the town and take some more photos.... the local tourist information centre can recommend a variety of local walks. A very good spot to watch the world go by is The Angel Inn of Corbridge which has been a coaching inn since 1726. More interesting links and info can be found at Wikipedia - here. Hard copies of local information and history are best obtained from the tourist info centre which also doubles as a library.
Scribbled by Hadriana's Treasures at 21:08

Never liked Corbridge much if I'm honest. Always suck me as an executive commuter town even before they were commonplace - never felt like the 'real Northumberland' that I loved so much.

Northumberland for me started to the north of Morpeth (the northern equivalent of Corbridge) and west of Dilston.

All a touch biased, but some truth in what I'm saying I think - Haltwhistle is a much more 'real' place

Personally, I think the name derives from an incident when someone was looking for a way to cross the river, came round the corner and went "Cor! Bridge!"

I'm smiling to myself. I know what you mean - in that - I had avoided it in the past because it was "Posh". That said...I am determined to discover it and take it to my heart because I am trying hard not to "prejudge" the town and townsfolk.

When I was there the other day everyone was really friendly and nice. It is fascinating to wonder where the stone comes from when looking at the houses. I like to compare and contrast but yes...I agree with you that Haltwhistle is a much more 'real' town.

I'm very glad you've raised this point (and brave to so so). It's a good discussion piece. I like lots of towns and cities but then another flavour starts to take them over. Is this a good or bad thing?

Quite topical in light of what has been happening lately in the rest of the UK.

I feel that I am very remote from the rioting and looting. Haven't been watching TV (no time)...just listening to radio and reading papers. Am I wrapped up in cotton wool (even in Haltwhistle)? Perhaps so? :-) Thanks for your comment. Hadriana/Catherine

You sneaked in! I like your version of events/name too! I also wondered on Twitter whether it was easier and shorter to write 'Coria' on the writing tablets. Quite often they'd squash words in and write up the sides of them just as we do (well did do) on modern day postcards.....

brave to do so....typo alert in my response back to Mark.

It also occurred to me today (on my tours) - that this area used to be the hub of looting, thieving, murdering during the Reiver period. It's been postulated that this all came about due to the lessening ofo Roman rule and there being a vacuum in power until the Union of Crowns in 1606. Even so the 'Reivers' i.e.: the "Wild West/East" families, tribes, clans of Nixons, Dixons, Bells, Armstrongs, Grahams, Elliotts, Taits and so forth who ruled this region held on for another 100 years or so until they were 'persuaded' to go to Ireland or the USA and beyond...and many stayed...

Something to mull on in these interesting historical times...

In fact the Union of Crowns (as I have just read) were more of a dynastic union - the proper Union of Crowns - England and Scotland came about 100 years later which explains things! Wikipedia says thus:

The Acts of Union were two Parliamentary Acts passed in 1706 by the Parliament of England, and in 1707 by the Parliament of Scotland, which put into effect the terms of the Treaty of Union that had been agreed on 22 July 1706, following negotiation between commissioners representing the parliaments of the two countries. The Acts joined the Kingdom of England and the Kingdom of Scotland (previously separate states, with separate legislatures but with the same monarch) into a single, united kingdom named "Great Britain".[1]

The two countries had shared a monarch since the Union of the Crowns in 1603, when King James VI of Scotland inherited the English throne from his double first cousin twice removed, Queen Elizabeth I. Although described as a Union of Crowns, until 1707 there were in fact two separate Crowns resting on the same head (as opposed to the implied creation of a single Crown and a single Kingdom, exemplified by the later Kingdom of Great Britain) . There had been three attempts in 1606, 1667, and 1689 to unite the two countries by Acts of Parliament, but it was not until the early 18th century that the idea had the will of both political establishments behind them, albeit for rather different reasons.

The Acts took effect on 1 May 1707. On this date, the Scottish Parliament and the English Parliament united to form the Parliament of Great Britain, based in the Palace of Westminster in London, the home of the English Parliament.[2] Hence, the Acts are referred to as the Union of the Parliaments. On the Union, historian Simon Schama said "What began as a hostile merger, would end in a full partnership in the most powerful going concern in the world ... it was one of the most astonishing transformations in European history."[3]

...And...ta da! Because the area was so lawless...a lot of the Roman stones were left alone and we still have a lot of them today...in situ and in museums.

Good that the hiatus was brief.

Major guilt trip sets in...I've not been over to your blog either. Will try and rectify that...over the coming days.

Hello, I spotted you on Julie from The Cloth Shed's blog and though I would have a look through your posts as I live in Northumberland. My French teacher was called Mrs Thirlwell (she was also my form teacher). Did you go to school in Newcastle? Abby

Thanks for popping by and leaving a comment. :-) Mrs. Thirlwell...I went to school in Newcastle at La Sagesse. It doesn't exist now sadly. Did you know her? Was that your school too? Be intrigued to know.... ;-) C/H xx