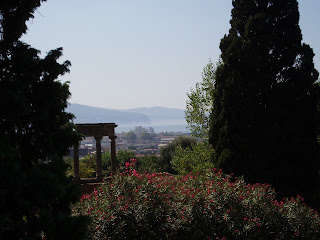 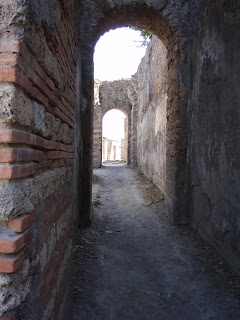 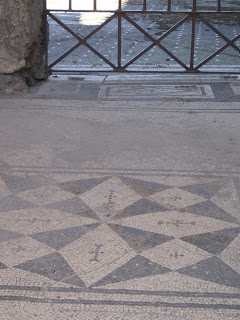 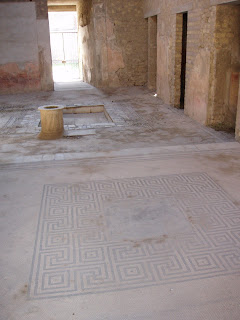 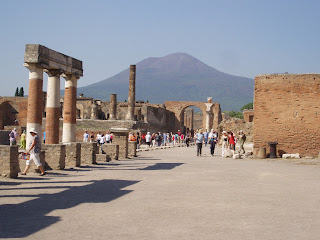 Going through the photos and the books again as I add captions...I'm once more struck by how much is here. We have many more photos but it is hard to convey the impression of what is actually there. We saw many, many villas, streets, water tanks (on the edge of each sector/street), shops, bakeries, theatres, barracks, baths, signs, mosaics, huge artefacts, temples, the forum, the basilica (these last two - formed the centre of civilian life), shrines, latrines, ovens, city gates, arches, tombs, rude inscriptions, posh inscriptions and yes - a brothel (queues galore!) and so on...

We were, in fact, at Pompeii for one whole day - walking almost non stop for seven hours. I'm glad I was wearing boots. The streets are/were quite high as they allowed for all manner of rubbish to flow down the streets (including water) during Roman times - hence the stepping stones.

I had quick glimpses of things. Pompeii does need repeated visits to try to make sense of it all. It is enormous and is a city. No doubt about it. I wanted to go and see the amphitheatre but at the end of a very hot, sunny day...I knew that I could not make that. So we made do with the two theatres which are spectacular. There were many villas which I missed seeing. Lots of the baths were closed - for restoration and/or a much needed rest. Apparently about 2.5 million people visit Pompeii per annum (each year)...that figure does not surprise me in the slightest. There were plenty there the day we were there and it was 30 degrees in the shade.

It was busier in the morning and the crowds thinned out over the day. There were many guides there...each had their different styles. Some with umbrellas, sticks and so on. Some with microphones attached directly to sound systems which their group could listen to. Others had the site's own auto guided system (which most museums now have).

I was very amused by seeing a restaurant in the middle of the site. Apparently Bill Clinton ate there when the G7 visited. (A special garden outside the restaurant was created for that occasion.) Nevertheless after hours of walking, walking and sight seeing - it was much needed and did, indeed, sell delicious food amongst other things.

I enjoyed seeing it all. Furthermore the excitement of having seen it has still not faded. It just makes me want to investigate further and know even more about the Romans. It all helps me imagine in my head what Roman life must have been like although when I compared Pompeii to Herculaneum (which was covered by mud and not ash by the eruption of Vesuvius) in 79AD I'm convinced that Pompeii is much bigger and posher than Herculaneum. Each has its different points and contrasts. Each teaches us variations on a theme. There are at least two sets of photos that I want to put on this blog some time soon to demonstrate something.

Pompeii is worth a visit. If you can - read up about it beforehand. It's an assault on the senses - in the best possible way.
Scribbled by Hadriana's Treasures at 14:11

Fantastic pictures and you have conveyed how large it is. I had not realised it was so big, but I suppose it all got preserved well by the lava. As you say, that sort of thing needs several tips to get your head round it.

Yes....... they were the kind of things that I used to look at in The National Geographic as a child.
How wonderful to see them for real.
Maggie X

I think extravaganza just about sums that up. what a fabulous place; never been, must do one day.

And as regards other post - love the sound of the Carts Bog inn..

ADDY and Maggie - they were/are really fabulous! I'm still enthusing about them now in my head...must go back again and see more...

Yes - agree with you. There are new owners/managers at Carts Bog and need to go and try them out very soon. I have a bunch of friends 'over that side' so must organise that.

There are quite a few 'unrecognised' pubs around here which are good too. Thanks Catherine :-)

Katherine
Great pix. Interesting to compare a "dead" site with the full of life ones in former Roman Gaul.
Don't forget the Vindolanda sign up a exactly noon GMT on the 1st. Here in the states we have a saying "You snooze, you lose!"
Tacitus

Thanks Tacitus. Will be back to your blog to read more. Looks like you had a lot of fun. :-) Catherine/Hadriana

We'd best have a dinner out on the in between weekend again!

Great Tim...that's fantastic. Jeff, the digger, has booked for that time too. So we'll start thinking about a pub/restaurant right now. Looking forward to it already! Catherine and Nigel :-)