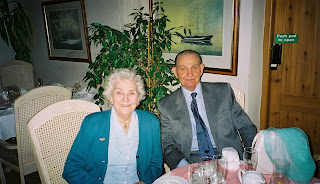 There's my grandfather (above) - 96 years old today! Happy Birthday! He's sat beside Hilda who worked for him and about whom I've blogged here. Hilda was a lovely person and so is my granda.

I'm lucky enough to speak to him every day/week as he lives with my parents. He's still doing his crosswords, watching Countdown and enjoying his sport on TV.

I must recount some of his memories some time. His recall is fantastic. Just today he was telling me how he got demobbed in York when he was 30 (he'd fought out in Burma in World War II). Didn't fancy the standard issue demob suits so got a smart blazer and trousers instead! He served with the Border Regiment and kept being called back to Barrow-in Furness Army Base but managed not to sit around in the army ranks (once the war was finished) as he had his fish and chip shop to run. This was during the time when lots of soldiers were waiting to be demobbed i.e.: allowed to leave the army officially. Apparently you got 'demobbed' according to when you were drafted into the army. FIFO = First In First Out. He was in unit 26 or 27 or so he said. Must check which.

I've always got on with him. He's a meticulous man and very practical as well as being very intelligent. Started work at 14 as a butcher's boy. Self employment runs in the maternal side of my family so he got his own fish and chip shop (following in the family tradition) as soon as he could. Made plenty of money that way. There must have been hundreds in South Shields alone. It was the only type of fast food available in those times. I remember going to his fish and chip shop on Saturday lunchtimes with my other grandma. I remember Hilda working there too.

I love listening to his stories. He always tells me of the size of the cod that was landed at South Shields' quayside just after the war - enormous - because the fish had been left to grow and grow for years and years.

At one point his family had a general store...stories of being a boy and licking the home made ice cream from the wooden vats on the counter...

What it was like to fight in the war...in the jungle...there's a not very nice story which I won't repeat here. A war time accident. Weapons being acidentally used/fired on our soldiers on our side. 'Friendly fire' as it's called now. He's matter of fact about it all: "When it's your time to go. It's your time to go."

I'm/we're hoping it's not his time to go for a good few years yet. Not sure the Queen sends a telegram now but, with luck, he should receive Her Majesty's equivalent.

Good on you Bob! Here's to you, let's hear more of your stories over the coming years! gratulationes! - Congratulations on making it to 96 years' young!

P.S.: Before I forget - he also told us yesterday that if my mother hadn't been born in January too..he would have been called up to fight at Dunkirk...and maybe all our lives would have changed!
He also also told us that he had paid a deposit for a house elsewhere in South Shields and was not told that the army paid a soldier's mortgage when he was away fighting. He lost the deposit (£100) on the house and the family moved in somewhere else. That DID change their lives and therein lies a whole other story...to be continued....

Scribbled by Hadriana's Treasures at 16:19

What a super man!
I gather that fish wasn't rationed in wartime...so no wonder fish and chip shops did well.
My father's remark on unfortunate aspects in action was
'If you can't take a joke you shouldn't have joined....'

making it to 96 is quite an accomplishment

Wow! 96! Happy birthday. And great that you're listening to all his stories too!
xx

Yes, Fly, he is a super, super man. He had tenants in his fish and chip shop whilst he was away fighting in the war. So yes - the fish and chip culture continued. He told me that they could only operate during the day to comply with blackout regulations at night.

I often wish I could write stuff up every time I speak to him. There's not always time but I attempt to remember as much as I can...

Many thanks Paul and I agree with you!

Thanks expatmum. He often repeats stories, which is just as well as it takes me a long time to absorb all the detail of his stories. Considering he was born in 1916 then amount of things he has lived through and witnessed....I could easily spend hours with him...

What a wealth of stories he must have, many happy returns to him.

Many thanks, Lynne, there are more birthday parties in the family today (all celebrated today) so we'll be wishing him all the best. Wishing you an excellent 2012 too. :-) Hxx

Good stuff. You need a little tape recorder. Recording for posterity is important I reckon.

Yes Ken! Glad to see you back here. Happy 2012 to you. Sometimes I try to record him when I can. I've also got a recording of him and Hilda talking. You've spurred me to see whether it is still there and retrievable. :-)

Any details on those giant post war cod? Oddly this plays into another story I was planning on telling.

Fish left alone for a few years do grow to considerable size despite the occasional accidental depth charging and such!

I'd be glad to get some details for you. I'll either let you know here or by e-mail. Seeing Bob this weekend and hopefully he will be able to elaborate! Be in touch. Hadriana/C. :-)

I was chatting to Bob this weekend and he says that he used to see 14lb cod very regularly...some were even over that weight - so I'm guessing up to 16lbs. Apparently there is a photo of him somewhere - he is holding one up showing the camera. I'll pester my mum and see if she knows where that photo is. Fingers crossed that we can put it on the blog sometime.
He said the cod were big before the war as fishing was still done largely inshore. The fish got bigger during the war due to the dangers of fishing. My step-uncle was there during the conversation and he recalls the fish fillets (taken from a single cod)(ready to fry) as being as huge as a man's hand or more. Bob then got diverted onto stories of the cod wars....therein lie more stories!

I must confess I was not sure how large codfish are supposed to be!