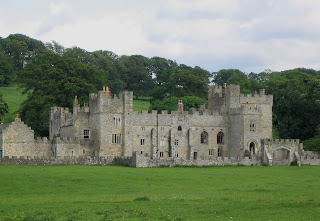 This photo is of Featherstone Castle which is not far from here again taken by the very talented Sandra Myers.

Some more wonderful photos of the castle can be seen here. Lots of the castles created and built around here came about in the Reiver period. It's a shame that touristically we do not shout a bit more about the Reivers. There is lots and lots to say about that period...

People argue that the period of the Reivers started when the Romans "left" i.e. from AD410 onwards and continued until the 1700s when the Union of the Crowns brought back the rule of law in these parts. So that's a heck of a long time. It was our "Wild West time" when anarchy, mayhem, thieving and murder ruled.

We get "bereaved" and "blackmail" from that time and many more words.

Castles and/or Bastles (from 'bastille' - French - fortified place/prison) were built (often) from stone taken from Hadrian's Wall. Lots of the castles (built by/to defend various local Reiving families and clans) are all over the countryside and due to the troubled background give rise to various ghost stories.

I've taken this information from http://www.medieval-castle.com/haunted_castles_england/featherstone_castle.htm :

"One well-known ghost story which is attributed to this fine old Castle concerns Abigail Featherstonehaugh who lived in the late 17th century. The story goes that she was in love with a boy from the local Ridley family but that she was due to marry the son of a neighbouring Baron in a sort of arranged marriage which was probably at the behest of her father Baron Featherstonehaugh. Apparently as was the tradition, the wedding party, all with the exception of Baron Featherstonehaugh who would oversee the banqueting arrangements, left for a hunt following the wedding. Legend has it that as the bridal party was riding through the estate there was an ambush possibly set by the spurned lover from the Ridley family. Although the new bridegroom fought gallantly, all the wedding party were killed in the affray.


As midnight passed, the Baron, sitting alone, heard the sound of horses hooves arriving outside the castle and it is said that the door opened following which the ghosts of Abigail and the rest of the wedding party entered making no sound and passing straight through solid objects.

It is said that the ghostly wedding party is seen again each year on the 17th of January on the anniversary of the tragedy."

It's well worth reading the whole page from that website. The castle is still in use to this day and is set in some splendid grounds.

'Featherstonehaugh' is pronounced as 'Fanshaw' (!!)


Scribbled by Hadriana's Treasures at 16:06

Great local blog post Catherine. I am totally fascinated with the history of our area... the Reivers, castles and bastles especially. In fact, we have one and are busy renovating it!
Julie x

Sorry Fly and the Cloth Shed...I attempted to post a reply to you yesterday but Blogger lost it. I lost the will to live (momentarily) so having another go today.

I'd love to write much more about the Reivers. I'm jealous of you, Julie (as well as Fly for living in Costa Rica)...I love old buildings so you must be having a lot of fun. Have you researched the building you are restoring?