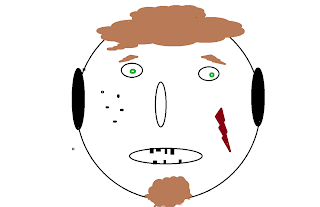 Am currently grappling with the delights of technology. I'm convinced that a firewall is not allowing me to access my computer to download photos to my blog so am using another computer for the moment...hence my range of 'photies' or images is a tad limited. I really do hope to try and get it solved today otherwise I will have to try and get round it somehow.

I think we have tracked down the pirate 'Black Jake' Fly. He's right before us as created by splendid son 'R'.
And that's right....Black Jake does go 'aarrrggghhhh' in good old pirate mode! 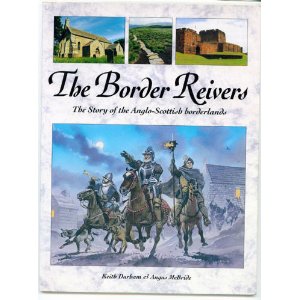 And talking of pirates...we had our own pirates up here pretty much from the 10th century onwards (and maybe even before). I bought this book a little while back and have been dipping in and out of it. I don't know enough about the 'Reivers' or Borderland Pirates so it's a good start. Am a great believer in reading slim books or children's books as a way of getting my head into a subject. (It's less daunting that way and if I can read a book inside of an hour I feel as if I have achieved something.)

Will be talking more about these Anglo-Scottish Border Raiders or Reivers in due course! Watch this space!

(It is commonly perceived that they gave us "blackmail" and "Bereived" or "bereaved" as well.)

@Geraint_Smith via Twitter has just kindly pointed out to me that 'bereaved' and 'Reivers' come from Old English (be) rēafian - to rob. Many thanks Geraint!

"Boldness, cunning and speed were the reiver's strengths, and his capacity to hit without warning and vanish without trace was largely due to his choice of weapons, armour and steed."
Scribbled by Hadriana's Treasures at 11:06

Try using a different browser first - that sometimes helps and it eliminates one possible issue.

I am relieved to know that piratical traditions have not been overtaken by PC considerations...

And on the subject of reivers....the hot trod was the forrunner of a convention in international customary law allowing pursuit across national boundaries of malefactors when to turn back at a burder would allow them to escape.

Many thanks, Mark, for pointing that out! Will try! Fingers crossed.

The hot trod - is something which I need to look into (so to speak!) On one forum I looked at...someone wondered whether it is the origin of the phrase 'hot to trot'...but I hadn't got around to denying or confirming that one....Thanks Fly once again. You are a mine of information!