"Snow had fallen, snow on snow" 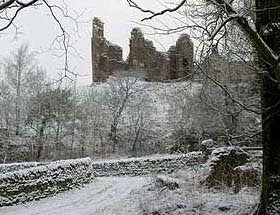 In the bleak midwinter

"This exquisitely melancholy and evocative carol, imagining the Nativity in a snowy Northern landscape, was originally written by Christina Rossetti as a Christmas poem for an American magazine, Scribner’s Monthly, in 1872." (Quoted from here.)
(Photo of nearby Thirlwall Castle taken a couple of years ago...but feels and looks like that today. Brrr!)
"In The Bleak Midwinter" has been named the best Christmas carol in a poll of some of the world's leading choirmasters and choral experts (BBC report 27th November 2008). And I have to say that I agree with them wholeheartedly. I'm not an overly religious person but there is something about the ritual of church in combination with marvellous music which always sends shivers down my spine.
I think it was Colin Dexter who coined the phrase "high church agnostic" and I think I would put myself in that bracket. When we lived in Egypt it was incredibly fascinating hearing the call to prayer several times a day. There was a Christian Coptic church in the town but oddly I did miss seeing (and hearing) churches and church bells around me.
My family, when we were in South Shields, had a connection with the local Church of England vicar and his wife. Mrs. Talbot taught the girls (including me) piano and Mr. Talbot, the vicar, taught my father how to play the violin. (Nothing short of incredulous as my father declares himself to be a republican atheist.) I used to sing in the church choir for christenings and weddings as well (a good way of earning pocket money). I also used to go to a Catholic Girls School so I imagine that something (possibly spiritual?) has rubbed off onto me. Nevertheless I was quite taken aback by my yearnings for Church spires and the like whilst living abroad.
My husband adores all things to do with Christmas and is not of the "Bah, humbug!" variety. This leaves its mark on me too (I used to be of the latter persuasion). So when I heard that this carol had come up trumps I was absolutely delighted. All I have got to do is to commit the verses in their entirety to memory as I never seem to get past the first verse with its frozen still images in their icy magnificence. (The last verse, I suspect, has a particular resonance at the moment....)
In the bleak midwinter
Frosty wind made moan,
Earth stood hard as iron,
Water like a stone:
Snow had fallen, snow on snow
Snow on snow,
In the bleak mid-winter,
Long ago.
Our God, heaven cannot hold him
Nor earth sustain;
Heaven and earth shall flee away
When he comes to reign:
In the bleak mid-winter
A stable-place sufficed
The Lord God Almighty
Jesus Christ.
Enough for him, whom cherubim
Worship night and day,
A breastful of milk,
And a mangerful of hay:
Enough for him, whom angels
Fall down before,
The ox and ass and camel
Which adore.
Angels and archangels
May have gathered there,
Cherubim and seraphim
Thronged the air -
But only his mother
In her maiden bliss
Worshipped the beloved
With a kiss.
What can I give him,
Poor as I am?
If I were a shepherd
I would bring a lamb;
If I were a wise man
I would do my part;
Yet what I can, I give him -
Give my heart.
Scribbled by Hadriana's Treasures at 10:57

Email ThisBlogThis!Share to TwitterShare to FacebookShare to Pinterest
Labels: In the bleak midwinter by Christina Rossetti

Yes it is melancholy and evocative but...call me a philistine...I'll stick with "California Dreamin'" by The Mamas and Papas, at this time of year. It's funny I've just been blogging on mine about the Christmas spirit (among other things).
http://uk.youtube.com/watch?v=-wI6uAOHzvo
this link will take you California Dreamin' and back about 40 years!

Beautiful carol and beautiful picture. I love the words in that carol, and when it is cold or snowy I often sing it out loud to my be-leagered family!
I think High Church Agnostic is a great description. I think it described me til 2001. I started having an increasingly strong faith after that, and have since found my place in the Church Community and my faith extremely comforting and inspiring too. No-one who knew me in an earlier incarnation can believe it.
Great post.

There are two settings of this poem: one by Harold Darke and other by John Ireland. I wonder which one won?

I hate to say this Troy but if I went back forty years I would be one! (Will check that soon thanks.)

Can Bass 1...I am quoting here: "Gustav Holst wrote a popular version of In the Bleak Midwinter in 1909, but it was Harold Darke's arrangement from 1911 - which begins with a solo voice rather than full choir - that won the poll." I reckon that answers your question. Thanks for popping by. (I will also try to glean more about the John Ireland version...)

Well I love Christina but don't much like religious things (sorry all you lot who do). So I will just say this is not a patch on her poem 'Goblin Market' that was part of last year's OU course.

FF, I looked at Goblin Market...I think I'll have to go back and read it properly to absorb it as it is a long one. I did find this excellent site: http://www.poetry-online.org/index.htm

Thanks for helping me find it!

Love this carol... utterly beautiful. Am a christmas fan... the first whiff of cinnamon and oranges and I'm a gonner.
Now that we are officially into Advent I can play my carol cds in the car. Hooray!!

I love anything by Christina Rossetti. My fav carol. What a brilliant photo. I wish we had just a little bit of snow here for the children to enjoy :)

LWM and Suburbia...I've started a poll of best/worst Christmas songs and carols. Troy has started the ball rolling with "California Dreamin'"!.....